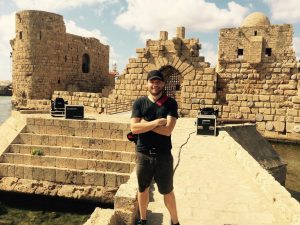 Field of Study: Medieval Europe and the Mediterranean

Dissertation Title (Working): The Islamic World and the Latin East: William of Tripoli and His Syrian Context

Contact Information:
Email: jpears15@vols.utk.edu
Curriculum Vitae
Biography: I earned my BA in History and Film production from San Francisco State University in 2005, and my MA in History from the same university in 2011. My dissertation examines boundary maintenance, transgression, and negotiation among the religious communities of the medieval Near East. My focal point is William of Tripoli, a thirteenth-century Dominican born in in modern Lebanon, who spent his career evangelizing Muslims from a priory in Acre (Akka/Akko, Israel). William wrote two widely-disseminated treatises on Islam that have been called “peculiar” because of their positive portrayal of both the Qurʾān and the Prophet Muḥammad, but have not otherwise been integrated into our understanding of the cultural milieu of the Crusader Latin East. I argue that the peculiar elements in William’s work were borrowed from Arabic-Muslim and Christian sources, and that his entire rhetorical approach to Islam was informed by them. I show how he is indicative of important conduits of religious and intellectual exchange between Latin and Arabic culture that until now have been poorly understood.

I have received several nationally competitive research fellowships while developing this project: the Fulbright Research Grant, a Bureau of Educational and Cultural Affairs Junior Research Fellowship at the W.F. Albright Institute in Jerusalem, and an American Research Center in Egypt Short-Term Research Fellowship, that allowed me to spend fifteen months from June 2015-September 2016 examining manuscripts, surveying sites, and networking with scholars in Lebanon, Palestine, Israel, Morocco, and Egypt. In addition, as a recipient of two Arabic Critical Language Scholarships through the US Department of State, I have spent nearly two years of my graduate career in the Middle East. These first-hand experiences fundamentally inform my work, which directly speaks to the larger global discourse on the relations between the post-colonial West and East. The ongoing strife in the Middle East has helped foster a pervasive assumption that we are witnessing a monolithic and inevitable conflict that dates back to the Crusades. While the Frankish settlements of the Latin East were born out of military conflict, the daily lives of its inhabitants were characterized less by direct confrontation with Muslims and local Christians, and more by the kind of negotiation, collaboration, and coexistence with them that we see in William of Tripoli’s work.

At the University of Tennessee, Knoxville, I have served as a graduate teaching assistant for the Department of History. In addition, I have  been an active participant in the MARCO community, and have been glad to serve as a judge for the Tennessee Historical Society’s  “History Day”. This year I am a dissertation completion fellow at the Humanities Center, and have enjoyed the opportunity to participate in twice-weekly seminars that showcase the work of a diverse, interdisciplinary group of scholars.