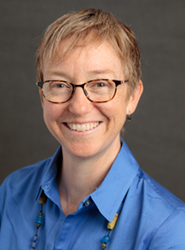 Tina Shepardson studies the history of early Christianity, particularly the Mediterranean world in the period of late antiquity. Her new book, Controlling Contested Places: Fourth-Century Antioch and the Spatial Politics of Religious Controversy, demonstrates the ways in which contests over local places shaped the development of religious orthodoxy and orthopraxy in the late Roman Empire. Her earlier book, Anti-Judaism and Christian Orthodoxy: Ephrem's Hymns in Fourth-Century Syria, examines Ephrem, a fourth-century church leader from Syria, and the role his sharp anti-Jewish language played in an intra-Christian theological struggle. She is currently beginning a new project on early Miaphysite Christianity, and the political and theological conflicts that consumed the eastern Mediterranean during the fifth and sixth centuries. In teaching about the history of early Christianity, she demonstrates the effects that early Christian arguments continue to have in the modern world, as well as the rich diversity of early Christian history. She is the winner of a 2016-2017 NEH Fellowship, a 2009-2010 ACLS Fellowship, a 2008 NEH Summer Stipend, and a 2008 Franklin Research Grant from the American Philosophical Society. Each year she presents her work at academic conferences and also around the Knoxville area. When not researching, writing, and teaching, she may be found hiking in the Smokies or canoeing in the Canadian arctic.