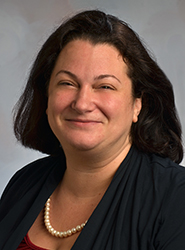 Helene Sinnreich is a scholar of Jewish experience during the Holocaust and European Jewry.  Dr. Sinnreich serves as the co-editor-in-chief of the academic journal Holocaust and Genocide Studies (Oxford University Press).  Dr. Sinnreich obtained her Ph.D. and MA from Brandeis University and her BA from Smith College.  She has served as a fellow at the United States Holocaust Memorial Museum in Washington D.C. in 2007 and at Yad Vashem in Jerusalem in 2009.

Dr. Sinnreich’s main research focus is on the experience of Jews in Nazi ghettos. Her forthcoming monograph The Atrocity of Hunger: Starvation in the Warsaw, Lodz and Krakow Ghettos during World War II (Cambridge University Press) focuses on hunger and starvation in three ghettos. She is also the author of A Story of Survival: The Lodz Ghetto Diary of Heinek Fogel (Yad Vashem Press, 2015).  Dr. Sinnreich employs a gender lens in much of her work.  Her most well-known research is on sexual abuse of Jewish women during the Holocaust.  This work appeared first as an article “And it was Something We Didn’t Talk About…” The Rape of Jewish Women During the Holocaust” Holocaust Studies (December, 2008). She has several current research projects including a study of public health in ghettos; a study of a series of selections at Auschwitz; and an examination of religious Jewish representations of Holocaust experience.