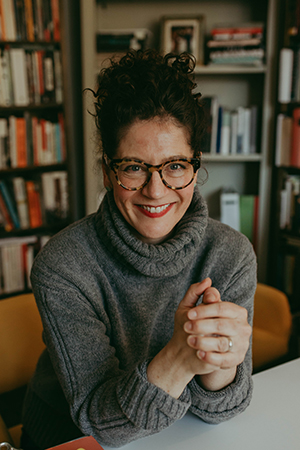 I am a historian of modern Europe. My research focuses on the cultural and social history of Germany, with an emphasis on the era of the World Wars and the decades immediately after 1945. I am the Editor of the journal Central European History and I serve as associate director of the UT Humanities Center.

My book, A Demon-Haunted Land: Witches, Wonder Doctors, and the Ghosts of the Past in Post-WWII Germany, appeared with Metropolitan Books (Henry Holt) in 2020.

A Demon-Haunted Land deals with the spiritual, psychological, and social effects of defeat in WWII and the subterranean legacies of Nazism in the early Federal Republic of Germany, as viewed through the prism of mass supernatural phenomena. Among the book’s meta-themes are the connections among religion, culture, and medicine; the relationship between trust and knowledge; the difference between facts and meaning; the uses of theodicy in everyday life; the embeddedness of religious ways of thinking in an apparently secular society; and the past’s habit of lingering in the present, no matter how studiously we ignore it. Research for the book was supported by grants and fellowships from the American Council of Learned Societies and the American Academy in Berlin, among others.

A Demon-Haunted Land has been translated and published in Dutch, German, and Polish editions. Brazilian, Russian, and Taiwanese editions are in preparation.

My first book was Death in Berlin: From Weimar to Divided Germany, which appeared with Cambridge University Press in 2010. Death in Berlin looked at the way people in Germany’s vast capital thought about death, imagined afterlife, and buried their dead from the aftermath of World War I to the building of the Berlin Wall. In an era of total war and mass death, and despite various ideologically-motivated attempts to transform them, the practices and rituals of death remained virtually unchanged. Ultimately, the book is about the stubborn durability of culture even in the face of sustained upheaval. Death in Berlin was awarded the Fraenkel Prize (2010) and the Hans Rosenberg Prize (2011).

Of particular scholarly interest to me as a historian are the “tacit conventions” and unspoken rules that guide daily life and sustain the social order—structures of time and space; values, moral norms; customs and classifications; and how communities understand themselves in relation to a cosmic order. As a historian, I am interested in how these change over time, often imperceptibly. My research and teaching interests are varied. They include: war and culture; folklore, memory, rumor, and oral tradition; the social and cultural history of medicine; and the philosophy, craft, and literature of history. For a description of my current research and writing projects, please click here.

I offer graduate and undergraduate courses on the history of modern Europe and modern Germany, on historical methods and practices, and on the history of everyday life. I teach an interdisciplinary graduate seminar called “Spiritual Medicine” (on the connections between religion and medicine from ca. 1500 to the present), two undergraduate seminars—“Medicine in the Third Reich” and “The Supernatural: A Global History”—and an undergraduate honors seminar, “Kultur in Modern German History.”

Before coming to Knoxville in 2011, I taught at Furman University and at the University of Virginia.

I welcome applications from potential graduate students interested in the cultural history of Germany and Europe and the connections of both to the wider world.