The Broken Heart of America:
St. Louis and the Violent History of the United States

Free, online and open to the public

Register Here
Registration is required in advance. After registering, you will receive a confirmation email containing the Zoom link and passcode. 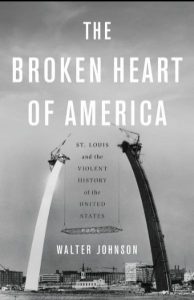 St. Louis was once one of the nation’s largest and most important cities. It was the site of the 1904 World’s Fair, also known as the Louisiana Purchase Exposition, a massive celebration of American imperialism in the city that was once the staging point for the westward expansion of the United States and the dispossession of Native Americans. There had been talk of moving the nation’s capital to St. Louis. The city is the home of institutions like Washington University in St. Louis, as well as Anheuser-Busch, founded by German immigrants in the nineteenth century, Monsanto, and McDonnell Douglas—all of which have now been bought by multinational firms. Three of the 25 wealthiest suburbs in the country are in metro St. Louis.

St. Louis’s apparent contradictions, Johnson suggests, may not be so incongruous. His book takes what is already widely known about modern St. Louis and writes it into a new story of the city, from its imperial history to its contested role in the nineteenth-century battle over the expansion of slavery to its racist urban planning and development policy.

Walter Johnson is the Winthrop Professor of History and Professor of African and African American History at Harvard University.  He grew up in Columbia, Missouri, and is a member of the Rock Bridge High School Hall of Fame (2006). His prize-winning books, Soul by Soul: Life Inside in the Antebellum Slave Market (1999) and River of Dark Dreams: Slavery and Empire in the Mississippi Valley’s Cotton Kingdom (2013), were published by Harvard University Press. His autobiographical essay, “Guns in the Family,” was included the 2019 edition of Best American Essays; it was originally published in the Boston Review, of which Johnson is a contributing editor. The Broken Heart of America: St. Louis and the Violent History of the United States was published in the spring of 2020. Johnson is a founding member of the Commonwealth Project, which brings together academics, artists, and activists in an effort to imagine, foster, and support revolutionary social change, beginning in St. Louis.