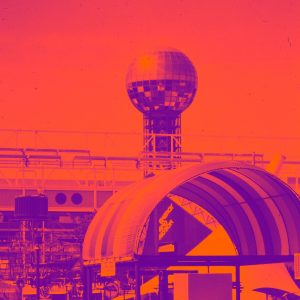 The world came to Knoxville in 1982 for the International Energy Exposition, with the theme of “Energy Turns the World.” Forty years later, historians at the University of Tennessee, Knoxville, and their colleagues are remembering the 1982 World’s Fair by exploring its historical significance and legacy through a series of podcasts hosted by WUOT.

“The Knoxville fair took place at the tail end of the Cold War, which was a turning point in America’s views of its place in the world, its environmental policy, and its ideas about urban planning and design,” said Ernest Freeberg, professor and head of the UT Department of History and co-host of the podcast. “Like any other world’s fair, there is much to be learned from a closer and more analytical look at the Knoxville fair.”

The four-part series analyzes and explores themes of the 1982 World’s Fair that include:

“While the history of these fairs has produced a small but rich scholarly literature, little has been written about the 1982 Knoxville fair,” said Shellen Wu, associate professor of history and one of the creators of the podcast. “The idea emerged from a program on the People’s Republic of China exhibit I hosted in collaboration with the East Tennessee Historical Society.”

In addition to the podcast series produced in collaboration with WUOT-FM, the project supported a short publication on the fair’s legacy, written by Knoxville History Project Director Jack Neely and a public program hosted by the East Tennessee Historical Society that included rare video provided by the Tennessee Archive of Moving Image and Sound.

“The UT history department enjoys a productive partnership with these community organizations “and the 40th anniversary celebration offers  a great opportunity for UT historians to work with these groups to provide a closer look at the historical significance of the 1982 World’s Fair,” Freeberg said. “We hope our podcast series will enrich that conversation by bringing the perspective of the humanities to bear on this celebration.”

The four-part podcast series is available online at tiny.utk.edu/worlds-fair-podcast.