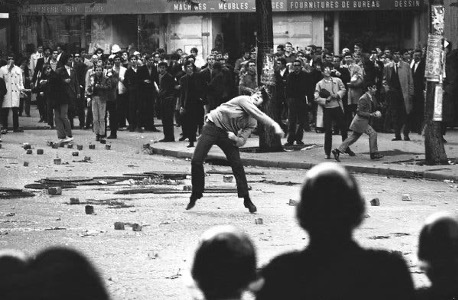 In our third entry on global histories of protest, violence, and race, Professor Margaret Andersen looks at the uprisings in Paris, France in 1968, and the impact of the scale of the protests and images of police brutality on French politics. Additional essays can be found here.

A boarded up window in Minneapolis recently displayed a message of protest connecting the current American protests against racism to a long tradition of revolutionary activity in France. In addition to evoking the French Revolution of 1789 with the words liberté, égalité, fraternité, the 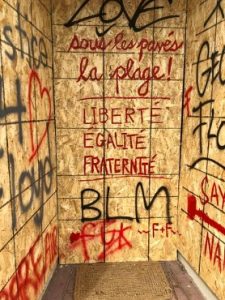 protestor painted the slogan sous les pavés, la plage. Translating roughly to beneath the pavement, the beach, the slogan appeared on walls throughout the city of Paris during the tumultuous month of May, 1968. In the midst of widespread protests and strikes, students ripped cobblestones off the street, revealing the sand beneath the pavement, hence the reference to the beach. They hurled these cobblestones at police and protested what they considered an artificial, antiquated culture and oppressive structures of power. They imagined, as this slogan challenged them to do, an alternative, more progressive society. 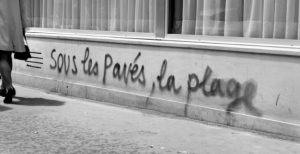 1968 was a revolutionary year across the globe with student protests erupting in countries such as Czechoslovakia, Mexico, Italy, Japan, as well as the United States. In France, the protests represented many different things, including a youthful revolt against the values of the older generation. Similar to the United States, France experienced a robust birthrate during the period 1945 to 1965. Le Baby Boom, as it was known in France, put pressure on the nation’s system of higher education as the number of university students rose from 150,000 in 1955 to 600,000 in 1968.[1] The state responded by hastily building new campuses such as Nanterre, located outside Paris. To students, the Nanterre campus was soulless, unattractive, lacking in social facilities, and seemingly cut off from the city. Moreover, this generation of students, more liberal than their parents, bristled at university policies upholding standards of bourgeois morality in student dormitories. Students rejected the teaching style and demeanor of their “autocratic” professors who gave dry lectures leaving no room for discussion. There was a sense that this type of education was designed for little more than to prepare students to be managers and civil servants in the booming postwar economy. While many of these students had grown up in comfortable bourgeois families enjoying unprecedented prosperity, many of them nevertheless rejected what they described as an artificial consumer culture.

Unable to make headway with the administration, students at Nanterre invaded university offices and demanded a say in university governance. Showing just how much they were influenced by radical politics, they called themselves the “proletariat,” an “exploited working class.” Following days of unrest, the authorities shut down this campus and the battleground shifted to the Sorbonne, the prestigious campus located in the heart of Paris. Images of crowds of students erecting barricades, damaging property, pulling cobblestones off of streets, and squaring off against the police soon featured prominently in the press. The French public, though inconvenienced by the scenes unfolding on the streets of Paris, was nevertheless outraged by images of young students beaten by the police.

Students were soon joined by striking French workers whose numbers would eventually reach nine million. For weeks the country was paralyzed. For Parisians this was a time when schools were closed, mail was not delivered, garbage was not collected, and many basic commodities were hard to find. Most people could only move through the city on foot as there was no public transportation and many roads were closed to cars. In certain sections of the city, it was hard to sleep at night as tear gas filled apartment buildings. During these months, the sale of books increased some forty percent. As scholar Kristen Scott notes, this increase in reading could be due to the fact that so many people were not going to work or school, and needed something to do.[2] Yet, the book sales were also connected to the intellectual engagement of the time. As one of my French friends recalls, this was a time of vibrant, spontaneous discussions. A Sorbonne student at the time, she remembers how groundbreaking it was to see her fellow students up at the podium in lecture halls, formerly the sacred preserve of elite professors. For once, discussion and debate filled the auditorium.

May 1968 produced the most massive strike France had ever experienced, and one that impacted every town in the country, no matter how small. This crisis was the downfall of President Charles de Gaulle. De Gaulle emerged as a leader of French resistance during the Second World War, served as president briefly following the Liberation in 1944, and then returned to power in 1958 at the height of the Algerian Crisis. In 1968 he was in his late seventies and made many statements suggesting he could not take this youthful movement seriously. De Gaulle at one point claimed that students were revolting simply to avoid taking their exams and to that he famously said “reform, yes – bed wetting, no.”[3] A well-known poster of the time depicts De Gaulle, covering the mouth of a young person with a caption reading “Be young and shut up.” It fell to his premier, Georges Pompidou 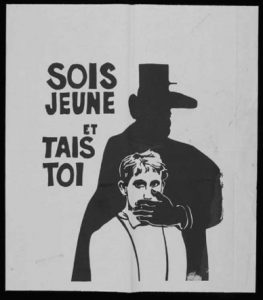 (who later served as president, 1969-1974) to negotiate with the labor unions and get the workers to return to work. De Gaulle, appearing ineffective and out of touch, left office shortly after this crisis and died in 1970.

As with any major protest, the events of May 1968 has a complicated legacy and one that is frequently evoked for political reasons by later generations. Decades later there are a range of interpretations about what these protests were really about, what they achieved, and if the cultural and political transformations ushered in by this generation can be viewed in positive terms