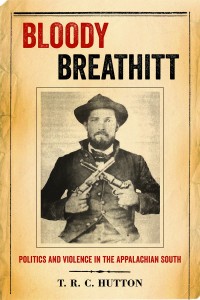 The award was established in 1970 to commemorate the lives of W.D. Weatherford Sr., a prominent Appalachian leader, and his son Willis D. Weatherford Jr., late president of Berea College. The award was presented on Friday, March 29, at the Appalachian Studies Association Meeting at Marshall University. One of the judges for the award noted being “surprised at the skill with which [the author] integrated analysis and narrative in a serious consideration of a topic that is usually handled anecdotally.” Another award judge declared, “The breadth of secondary sources is astonishing.”

In Bloody Breathitt, Bob Hutton casts a critical eye on Breathitt County, Kentucky, for the first time. From the Reconstruction period until the early twentieth century, Breathitt’s 500 square miles of rugged upcountry land was known as “the darkest and bloodiest of all the dark and bloody feud counties.” Hutton carefully investigates instances of individual and mass violence in the county from the Civil War through the Progressive era, exploring links between specific incidents and broader national and regional events. This meticulously researched volume offers the first comprehensive narrative of the violence in this infamous Kentucky county, examining Breathitt’s brutal history and its significance to the state, the South, and the nation.

Hutton is a lecturer in the department of history at the University of Tennessee.