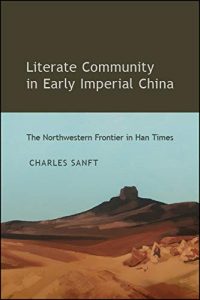 Congratulations to Charles Sanft, winner of the prestigious James Henry Breasted Prize from the American Historical Association. This prize is awarded to the best book in English in any field of history prior to CE 1000. Dr. Sanft’s monograph, Literate Community in Early Imperial China: The Northwestern Frontier in Han Times, was published by State University of New York Press in 2019.

“This book examines ancient written materials from China’s northwestern border regions to offer fresh insights into the role of text in shaping society and culture during the Han period (206/2 BCE-220 CE). Left behind by military installations, these documents–wooden strips and other nontraditional textual materials such as silk–recorded the lives and activities of military personnel and the people around them. Charles Sanft explores their functions and uses by looking at a fascinating array of material, including posted texts on signaling across distances, practical texts on brewing beer and evaluating swords, and letters exchanged by officials working in low rungs of the bureaucracy. By focusing on all members of the community, he argues that a much broader section of early society had meaningful interactions with text than previously believed. This major shift in interpretation challenges long-standing assumptions about the limited range of influence that text and literacy had on culture and society and makes important contributions to early China studies, the study of literacy, and to the global history of non-elites.”