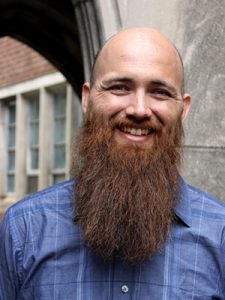 It is our bittersweet pleasure to announce the first recipient of the Joshua S. Hodge Award for the Recovery of Lost Voices. The award is named in honor of our friend, Dr. Joshua Stephen Hodge, a department graduate student who passed away one year ago today, twenty months after being diagnosed with terminal brain cancer and six weeks after earning his PhD. In addition to being a warm friend to all of us who knew him, Josh was also an active member of our profession, with a special commitment to recovering the historical voices and stories that too rarely find their way into the historical record. We therefore have dedicated this award in Josh’s name to honor a PhD student in any subfield who has shown promising achievement in the field of social history, broadly construed.

Please join us in congratulating this year’s recipient of the award, Tess Evans. Her recently defended dissertation, “From Native Ground to Underground: Rival Cultural Landscapes in Eighteenth and Nineteenth-Century Arkansas,” is an excellent example of how to write a new synthetic story of the North American Southeast. Inspired by her master’s thesis on swamps as areas of refuge for African-Americans in the late 19th century, Dr. Evans went back to the 17th century to understand the traces of European exploration and colonization in Native spaces of authority. As people of European descent gained the upper hand economically, “Native Ground to Underground” looks from the perspective of archivally-marginalized groups to trace the geographic and experiential effects of multiple transformations on the land–from the rumblings of Atlantic Revolutions, to the expansion of slavery in the Arkansas Territory, to the waves of migration of American Indians (and sometimes runaway slaves) along the Trail of Tears.

We would like to extend special thanks to Emma Jackson, whose generous donation has made it possible for us to give out this award and honor Josh’s legacy this year.

If you are able to contribute to the award endowment, please follow this link.