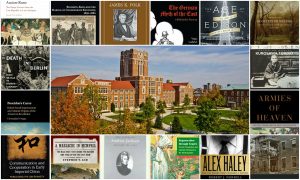 Our faculty in European history have particular strengths in Late Antiquity-Early Middle Ages including early Byzantium and the early Islamic World, the Later Middle Ages and Reformation, and Modern European History (particularly Germany). Faculty guide masters’ theses and doctoral dissertations, and offer a wide range of graduate and undergraduate courses. Particular topical strengths of the Europeanists in our department are: war and society/culture; religious communities and conceptions of holiness and heresy; the history of empire; race, nation, and gender; borderlands; the history of science; and international relations and diplomacy. In addition, through General Education Western Civilization courses, the European history faculty teach a large percentage of all the undergraduates at UT.

Our department’s American historians offer concentrated strengths in African-American history, Atlantic and transnational history, early American history, nineteenth century history, religious history, and southern history. The Americanist faculty are leaders in their respective fields, and their books have garnered awards from the American Historical Association, the Southern Historical Association, the Southern Regional Council, the Society for Historians of American Foreign Relations, the Kentucky Historical Society, and the Agricultural History Society, among others. They are supported by the outstanding manuscript collections of the UT libraries, a presidential papers project, and the department’s Center for the Study of War and Society. Faculty members regularly offer specialized graduate courses in African-American history, capitalism and slavery, southern history, early American history, political history, history of medicine, Atlantic history, the Civil War Era, and the United States in the world. These professors play a key role in the graduate program through coursework and guiding theses and dissertations. And in teaching general survey courses, upper-division courses, and honors seminars, the professors of American history have been recognized for their commitment to undergraduate education, as has the department in general.

UT’s World History Program draws together the diverse talents and interests of a broad, multidisciplinary faculty. In teaching world history and specialized courses in Jewish history and the history of Africa, China, Japan, Latin America, and the Middle East, these faculty members play an important role in expanding the academic experience and intellectual horizons of UT’s undergraduate students. These faculty members are also an essential part of the graduate program, offering courses, participating in thesis and doctoral committees, and teaching Group III courses. An ability to teach world history has become a common prerequisite for many academic positions offered today.