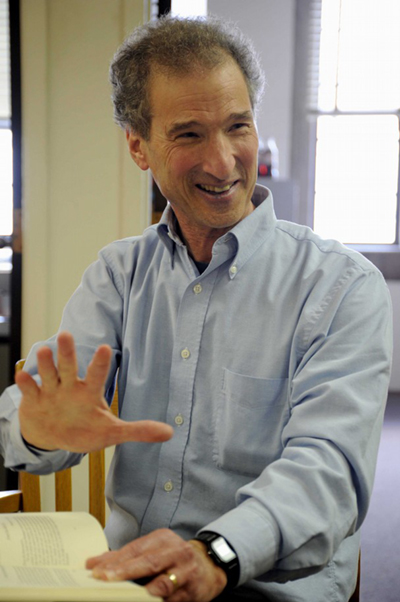 Dan Feller joined the Department of History in 2003 with a scholarly focus on Jacksonian politics. This spring, he retires as a Distinguished Professor of Humanities and leaves a legacy of building one of the most important and visible presidential papers projects in the country – the Papers of Andrew Jackson.

“Under Dan’s leadership, the Jackson papers project has made a bid to become the most productive and respected documentary editing project of its kind in the country,” said Thomas Coens, associate editor of the Jackson Papers. “We have published at a breakneck clip while maintaining rigorous standards of thoroughness and accuracy. Fellow scholars praise the project and in 2017, it won the Jefferson Prize.”

The project received a grant from the National Endowment of the Humanities in 2018 to prepare Volumes 11, 12, and 13 for publication. The $325,000 grant was the second highest among the 21 awarded in the 2018 NEH Scholarly Editions and Translations program.

“The generous grant was the largest we have ever received from the NEH and came as a welcome show of confidence in the quality and significance of our work,” Feller said. “Jackson is an inescapably important figure in our nation’s history. From its beginning, the aim of the Jackson papers project has been to promote our understanding of Jackson and his era by making available the crucial primary sources and documents from which we can see, directly, what our forebears said and did.”

Andrew Jackson is one of the most critical and controversial figures in American history and a president of great interest to the public. In recent years, Jackson has become even more relevant and controversial due to two developments: first, the tentative decision to remove him from the $20 bill in 2016; and second, the fascination with comparing Jackson to Donald Trump.

“Both of these developments have been a blessing and a curse for the Jackson Papers and its public outreach efforts,” Coens said. “On the one hand, we’re happy to play our traditional role of providing the public with the underlying facts and information that lie beneath these debates. On the other hand, the amount of misinformation that circulates nowadays about Jackson, especially within pieces attempting to compare and contrast him with Trump, is troubling, and trying to correct it all can often feel like playing whack-a-mole. Dan, however, to his credit, has been an indefatigable warrior these last four years in trying to bring some sanity and historical grounding to those debates.”

In 2016, Feller received the Faculty Outreach Award from the College of Arts and Sciences for his efforts at making UT the place to go for journalists, popular writers, and teachers who want to get the story of Andrew Jackson right. This spring, UT honored Feller with a Chancellor’s Honors Award for Research and Creative Achievement for his accomplishments as editor and director of the Papers of Andrew Jackson.

“The works produced under Feller’s leadership are deeply researched, and have already proven to be invaluable resources for those outside the academy,” said Ernie Freeberg, professor and head of the UT Department of History. “Popular historian Jon Meacham relied heavily on Feller’s counsel in writing his Pulitzer-prize winning American Lion: Andrew Jackson in the White House, and more recently, Steve Inskeep of NPR published a volume on Jackson that relied explicitly on Dan Feller’s scholarship and advice.”

As a project in the history department, the papers are more than just a collection of correspondence or an opportunity to share scholarly expertise with the public.

“The Jackson papers are a recruitment tool for our graduate program that allows us to compete for top-quality graduate students with other programs that are usually better funded and have a larger faculty,” Feller said.

Max Matherne is one of the graduate students who chose UT because of Feller and the history department.

“It would be no exaggeration to say that I probably would have never attended graduate school if not for Dan Feller,” said Matherne, who was torn between a PhD in history from UT or attending law school. “My heart tugged me toward history, but my head warned me that there was little left to say about the subject I wanted to study – Jacksonian politics. A single phone conversation with Professor Feller cleared all that up.”

Six years later, Matherne successfully defended his dissertation looking at the very same topic he discussed with Feller during their first phone call.

“In many ways, Professor Feller is my scholarly role model,” Matherne said. “He is a model mentor, not just to his students but to anyone who works in the field. He knows how to balance necessary criticism with essential encouragement. Whether he’s discussing a published monograph or editing a dissertation chapter, he knows how to pinpoint illogical assumptions or gaps in evidence. As a mentor, he has always encouraged us to follow our guts and our interests, trusting that our passions and dedication would yield quality work.”

Coens notes Feller’s work ethic as one of the most memorable things that stand out during the years they worked together on the Jackson Papers project.

“Dan has high standards when it comes to the quality and accuracy of the scholarship produced by the Jackson Papers and by his editors,” Coens said. “Like any good historian worth his or her salt, I came into the job with similar standards, but Dan’s insistence on triple- and quadruple-checking information and transcriptions, on not giving up on a question or a problem until no stone is left unturned, is infectious. I have no doubt that he has made me a better historian.”

Feller’s work will not end when he retires. He will stay involved with the Papers of Andrew Jackson project through another volume, which will be his sixth, and finish a book of his own.

“I have enough researching, writing, and speaking to keep me busy as long as my energy holds up,” Feller said. “I’m not quitting and I’m not going anywhere. Like most dedicated historians, I’m in it for life.”