Hillary Briggs understands the weight and honor of being the first.

As one of the inaugural recipients of a scholarship named in honor of Cynthia Griggs Fleming, the University of Tennessee’s first black female history professor, Hillary welcomes the financial boost to her college education. But even more permanent than the funds that will fade with the purchase of next semester’s books is the award’s steeped history. Knowing the story behind the award gives her a dose of a boldness to go forward confidently in pursuit of her aspirations as a junior with a focus on women’s studies.

“She [Fleming] was the first. The first black woman to earn a doctorate in history from Duke University. The first black woman to teach history at UT. And now I am a first because of her,” she pauses, almost as if reflecting on the gravity of Fleming’s journey as a pioneering historian of the civil rights movement, who chaired the African-American Studies program at UT for a decade before retiring in 2014 after thirty-two years of service. 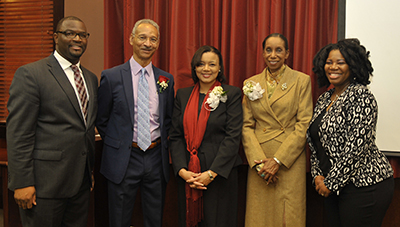 The journeys of Fleming and John H. Morrow Jr., the first black faculty member and department head in the College of Arts and Sciences, who now serves as the Franklin Professor of History at the University of Georgia, and UT’s Journey to the Top 25 campaign inspired UT history faculty—Shannen Dee Williams and Brandon Winford—to add fundraising to their researching and teaching load. The assistant professors of history are knocking on doors and making phone calls and visits. Their grassroots effort will birth an endowment that honors the storied legacies of Fleming and Morrow, sharing their light with the university and surrounding community through a fellowship and an annual lecture series in African-American history, as well as boosting the work of students like Hillary through excellence awards.

More than just a good idea, the Fleming-Morrow African-American History Endowment is seen as a responsibility for Williams and Winford, who are already laser focused on planning next year’s lecture series, all the while conquering their own book projects.

“We are all better for it when we have a more accurate and honest accounting of American history.”

With funds already raised, the inaugural student excellence awards were given at the close of the semester and the March distinguished lecture featured Tomiko Brown-Nagin, the Daniel P.S. Paul Professor of Constitutional Law and professor of history at Harvard University. The author of “Courage to Dissent: Atlanta and the Long History of the Civil Rights Movement” won the 2012 Bancroft Prize in American History, the highest honor awarded annually to work in the field of history. The lecture showcased the groundbreaking career of famed civil rights lawyer Constance Baker Motley, who argued and won nine cases before the US Supreme Court.

—Hillary Briggs, inaugural recipient of the Cynthia Griggs Fleming Award for Student Excellence in African-American History and a rising junior at UT.

The student awards and lecture offered a hint of what the endowment could become. Placing the UT history department at the center of scholarly conversation, the endowment adds to the department’s national and international renown, attracting top graduate students and enriching the learning and training of all students—graduate and undergraduate.

“It’s not just us telling our students about the past,” Winford said. “It’s our responsibility to help shape the conversations now and to equip our students to face the world they will encounter after college.”

“It’s important for an institution to remember its legacy, and this endowment does that by honoring two important and pioneering members of our department,” Freeberg said. “But it’s also looking ahead, as the department builds new strengths in African-American history. The lecture series, scholarships, and fellowship that will be provided by the Fleming-Morrow fund are great steps for us as we strive to make UT one of the best departments in the region to study African-American history.

“All this reflects the great passion and commitment of Williams and Winford. What they’ve accomplished in such a short time is very impressive.”

“It was never a question of should we do this,” said Williams.

“It has always been about the possibilities,” added Winford, “and creating the blueprint to preserve and celebrate our history.”