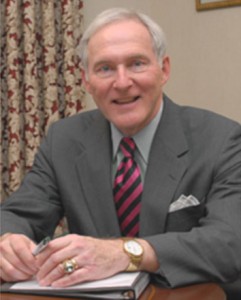 The Department of History recently named Charles F. Bryan, Jr. its Outstanding Alumnus for 2015. This is department’s first alumni award and was presented at the honors ceremony on April 22. The Alumnus award will be presented annually in future years.

A native of McMinnville, Tennessee, Bryan earned his doctorate from UT in 1978 under the direction of Emeritus Professor Paul Bergeron, specializing in the American Civil War.

Bryan is one of the nation’s preeminent public historians. He served as assistant editor of the Papers of Andrew Jackson, and also as executive director of the East Tennessee Historical Society and the St. Louis Mercantile Library Association. In 1988, he was appointed chief executive officer of the Virginia Historical Society (VHS). During his twenty-year tenure there, Bryan raised more than $110 million, which resulted in quadrupling the size of the VHS’s headquarters and a major expansion of programs. When Bryan retired, the VHS named its new education wing in his honor.

Bryan served as president of the American Association for State and Local History and was president of the Independent Research Libraries Association. He is a member of the board of the Smithsonian’s National Museum of American History. His extensive publications on museum management and the Civil War include the best seller, Eye of the Storm, a Civil War Odyssey, and a follow-up volume Images from the Storm, based on the diary of a Union soldier.