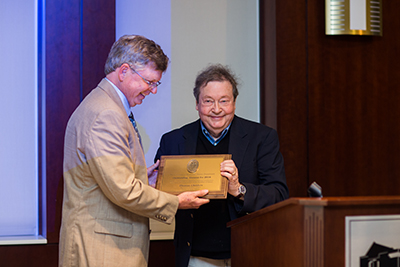 Thomas N. Childers was named the department’s outstanding alumnus for 2016 at the annual honors ceremony on April 20.

Childers earned the bachelor’s and master’s degrees in history at UT, before going to Harvard to complete a doctorate in history in 1976. Currently, Childers is Sheldon and Lucy Hackney Professor of History at the University of Pennsylvania (PENN), where he has taught since 1976.

Childers is the author and editor of several books on modern German history and the Second World War, including The Nazi Voter (Chapel Hill, 1983), The Formation of the Nazi Constituency, (London, 1987), and Reevaluating the Third Reich: New Controversies, New Interpretations (New York, 1993). He has completed the third of a quartet of books on the Second World War—Soldier from the War Returning: The Greatest Generation’s Troubled Homecoming from World War II (Houghton Mifflin, 2009). His latest book offering a new interpretation of the rise and fall of the Third Reich will be published in 2017.

Visit our website to learn more about our distinguished alumni and use the Alumni Response Form to update your information or to add your name to the department mailing list.