Sometimes just reading about a historical issue or problem isn’t enough to fully understand it. Travel to the location enables students to acquire firsthand experience that both deepens their knowledge and enriches their perspective.

Similarly, the documents needed for research are frequently archived in far-flung locations and the only option to access them is travel. But how do full-time students fund travel that is critical to their learning and research, but not covered by tuition? That’s where gifts from generous donors come in. Gifts large or small can have a big impact on students’ educational experiences. These selected stories illustrate how students have benefited from enrichment funds, named scholarships, endowment funds, and other gifts. 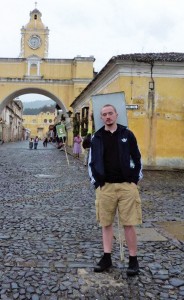 Charles Walton received a $3,000 grant in 2013 from the Department of History Enrichment Fund for five weeks of travel and study in Guatemala and Nicaragua. He visited Managua, Nicaragua and studied Spanish in Cobán, Guatemala, a small city in the highlands just south of the tropical forest, and in Xela (Quetzaltenango), the second largest and one of the most culturally diverse cities. Walton is grateful for the grant that enabled him to witness the effects of a long history of colonialism, neocolonialism, civil war, and genocide. Central America is a region often overlooked by historians, despite its importance in understanding modern geopolitics. His trip to Central America opened his eyes in a way that no book or film could have done. Walton graduated in 2014 with a bachelor’s degree in 20th century US and Latin American history.

In spring 2014, graduate student Denise Harris received a $500 travel grant from the Bruce Wheeler Award which helped support her visit to the John W. Hartman Center in the David M. Rubenstein Rare Book & Manuscript Library at Duke University. She began researching her dissertation, which will explore representations of African American women in late twentieth century print advertisements. She spent five days surveying archival materials from the John Walter Thompson Collection, examining visual sources (magazine advertisements and newspaper clippings), research materials (focus group results and consumer studies), analytical materials (sale reports and advertisement efficacy data), and prescriptive materials (niche marketing guides and ethnic marketing guides). Her time at the Hartman Center helped her to determine the direction of future research and begin developing a dissertation thesis. She is grateful for the financial support of the Bruce Wheeler Award and the summer research it made possible.

Graduate student Josh Sander received a travel grant of $1800 from the department in 2013 that enabled him to attend two seminars: the Summer Archival Research Seminar at the Center for Jewish History in New York City and the Summer Institute on the Holocaust and Jewish Civilization presented by the Holocaust Education Foundation at Northwestern University in Chicago. During summer 2014, another departmental grant of $2000 subsidized his visit to the Dutch National Archive in The Hague and the NIOD Institute for War, Holocaust, and Genocide Studies in Amsterdam. Both archives contain essential records documenting education and propaganda generated by the German occupation during the Second World War, and essential to completing his dissertation. The travel grants not only helped him begin his dissertation research, but also made him more competitive for outside funding. During the 2014-2015 academic year, he is the Norman Raab Foundation Visiting Fellow at the Jack, Joseph, and Morton Mandel Center for Advanced Holocaust Studies at the United States Holocaust Memorial Museum in Washington, D.C., an opportunity he traces directly back to the generous support of donors to the Department of History Enrichment Fund.

Jeremy Pearson is a fourth year doctoral student specializing in Muslim-Christian-Jewish relations in the later Middle Ages. One of the difficulties of being a medievalist in the United States is that most of the pertinent archives and libraries are located abroad. Fortunately he was awarded the UT affiliated fellowship at the American Academy in Rome, which is made possible by a variety of university departments who contribute from their enrichment fund accounts, including the MARCO Institute of Medieval and Renaissance Studies and the Department of History. The fellowship allowed Pearson to spend five weeks at the American Academy in Rome, one of the premier institutes in Europe where he had access to archives and libraries including the Vatican Library and the Pontificio Istituto Orientale, an important library for Arabic Christian sources. He also benefited from the opportunity to interact with some of the top pre-modern scholars in the world, sharing ideas and developing personal and professional connections. Opportunities like this one, which foster cutting edge scholarship and contribute to UT’s international reputation, are made possible by the generosity of our donors.