Examining writing from China’s northwestern border, Charles Sanft offers fresh insights into the role of text in shaping society and culture during the Han period (206/2 BCE–220 CE). Documents from abandoned military outposts — wooden strips and other nontraditional textual materials such as silk—recorded the lives and activities of military personnel and the people around them. Sanft explores their functions and uses, including signaling across distances, brewing beer and evaluating swords, and letters exchanged by low-ranking officials. These sources reveal that a much broader section of early society had meaningful interactions with text than previously believed, which directly challenges long-standing assumptions about the limited influence of text and literacy had on early Chinese culture and society. More broadly, Sanft’s new book makes important contributions to the study of literacy and to the global history of non-elites. 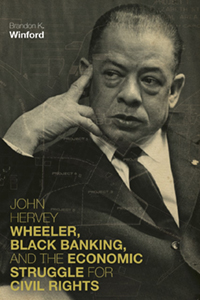 In his new book, Winford combines black business and civil rights history to explain how economic concerns shaped the goals and objectives of the black freedom struggle. Winford focuses on the black business activism of banker and civil rights lawyer John Hervey Wheeler (1908-1978). Wheeler graduated from Morehouse College in 1929, and then moved to Durham, North Carolina, where he landed a job as a bank teller with the Mechanics and Farmers Bank (M&F Bank), one of the nation’s largest black-owned banks. In 1952, he became president of M&F Bank, a sister institution to the North Carolina Mutual Life Insurance Company (N.C. Mutual). Between the 1950s and 1960s, Wheeler was the Tar Heel State’s most influential black power broker and among the top civil rights figures in the South. Winford’s new book examines one of the leading black businesspeople in the United States in one of the country’s most well-known “Black Wall Streets.”