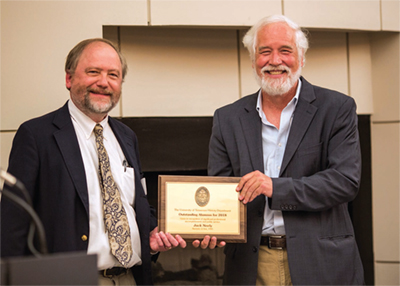 Faculty in the Department of History are honored to award Jack Neely the fourth annual Distinguished Alumnus Award. Neely (’81) is the executive director of the Knoxville History Project, but his love for history began before he could read. Tales of King Arthur, Robin Hood, and Davy Crockett, combined with his father’s interest in world history, built the foundation for a lifelong passion.

Neely began his college career at UT studying journalism. He spent a few months as an undeclared English major interested in modern poetry until one day he realized, to his surprise, that he had more credits in history than English.

“I think I took every undergraduate class that Bruce Wheeler and Milton Klein taught,” Neely says. “I remember several other faculty I had for one class or so, and no two were at all alike. The worldviews they presented were so different that it was startling to see any of them together. To me, that was part of what made history, which is really a synonym for reality, so interesting.”

Neely credits his history degree for giving him the skills to investigate more or less everything.

Since graduating, Neely has combined his passion for history with his journalism experience to become one of the most distinguished journalists in Knoxville and its best known historian. For more than two decades, he was a staff writer, columnist, and associate editor of Metro Pulse. He then helped to found the Knoxville Mercury, for which he wrote a weekly history column and features pertaining to Knoxville history. At the same time, he founded the Knoxville History Project, whose mission is to research and promote the history of Knoxville. He has written a number of books on Knoxville history, gives many tours and lectures each year, and mentors UT undergraduates through his role in the department’s course on public history.