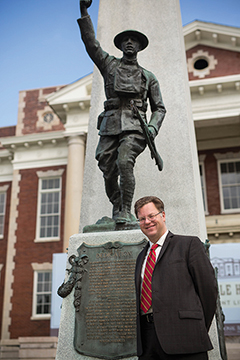 This year, as Americans join their European counterparts in remembering World War I, UT historians have helped the campus and community to honor this centennial and reckon with the war’s meaning.

The war destroyed three vast European empires and gave rise to new countries such as Poland, Yugoslavia, and Czechoslovakia. Britain and France also carved up the Middle East along arbitrary lines and created borders for modern-day Iraq, Jordan, Syria, Lebanon, Kuwait, and Saudi Arabia, disregarding how they divided tribes and pushed together ethnic groups that had centuries-old feuds.

“The borders drawn then are the ones being contested today,” says Vejas Liulevicius, director of the Center for the Study of War and Society (CSWS) who lectures on the fact that many of today’s news headlines can be traced back to decisions made after the war.

In addition to redrawing the world map, the Great War changed our culture in profound ways.

“The English language was never the same,” Liulevicius says. “Words like honor, sacrifice, and duty could never be completely unproblematic again.”

Liulevicius is the author of two books that explore the impact of the war on Germany and Eastern Europe and produced a 36-lecture recorded course on WWI with The Great Courses company. He serves as a member of the Tennessee Great War Commission, a nine-member panel of scholars working to improve the public’s understanding of this watershed moment in world history and to honor the service of Tennessee soldiers and their families. Last fall, he was featured in a historical documentary on the Eastern Front in WWI, filmed on location in Lithuania by the German company Florianfilm. The documentary, A Master Race for the Emperor: Ober Ost as a Forgotten Colony, aired on German and French public television. He also was invited to speak at the National World War I Memorial and Museum in Kansas City.

Closer to home, the war left a conflicted legacy over the expansion of federal power and the rights of citizens to speak out against war.

“People have such strong memories of patriotic posters and victory parades, but we forget how divided the American public was in April 1917,” says Ernest Freeberg, head of the Department of History. “Many felt the European war was not America’s problem to solve, and the sympathies of American immigrants were torn. Religious pacifists, political radicals, and many people of German, Irish and Jewish ancestry were deeply ambivalent, and some openly resisted the call to war.”

The government’s effort to rally American support included the nation’s first massive propaganda campaign and the arrest of almost 2,000 anti-war speakers. Stirring war fever, the government inspired a wave of vigilante violence against war dissenters. Freeberg is the author of a book exploring the imprisonment of Eugene V. Debs, the Socialist leader sentenced to 10 years in prison for speaking against the war. As part of the Great War centenary, Freeberg has been sharing the story of Debs’s arrest, and the civil liberties movement that won his release, with audiences on campus, around Knoxville, and at other universities and historical societies in Tennessee and several surrounding states. 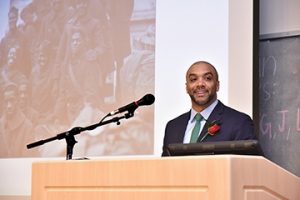 To ensure that people do not forget the legacies of World War I, staff at the CSWS organized a series of events, including lectures by faculty and graduate students, which was funded from a $1,200 grant from the Library of America (in cooperation with the National Endowment for the Humanities and the Gilder Lehrman Institute). This programming kicked off in February with co-sponsorship of the Fleming-Morrow lecture, which featured military historian Chad Williams of Brandeis University, who explored the role of 380,000 black soldiers who fought and labored in the US Army during the conflict. It highlighted the legacy and struggles of the solders on and off the battlefield, at home and abroad. In April, CSWS also cooperated with McClung Museum on campus to host a public hands-on examination of artifacts of the war from museum collections.

For more information about the Center for the Study of War and Society, visit csws.utk.edu.