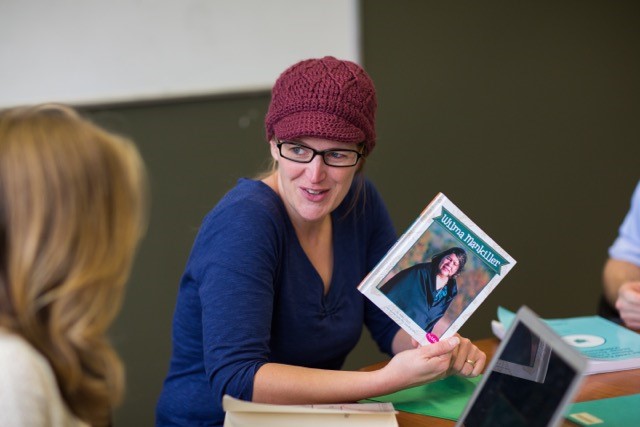 A group of history students spent last fall delving into the lives of Cherokees who called East Tennessee home in the 1800s, before they were forcibly removed and relocated west of the Mississippi River.

The students’ research and recovery of the lost stories of Cherokee people could be translated into the Cherokee language and become children’s books that would find their way to immersion schools, cultural centers, and local museums.

“It helps us understand that history is not just a jumble of dates but an explanation of how we all came to be the way we are now,” said Katie Myers, a College Scholar and UT junior.

She added that the biographies will help children relate better to history, noting that “It’s really important for people to know their own story and know the stories of people who are just like them.” Myers was one of five students in the upper-level course, Not Just Sequoyah and John Ross: Cherokee History through Biography.

“So many of the problems I face teaching students come from misinformation from a younger age,” said Julie Reed, a Cherokee historian and UT assistant professor of history, who taught the class. She is a citizen of the Cherokee Nation. “They learn about the Trail of Tears, Wounded Knee, and other incredibly tragic moments in Native American history. But I want them to understand the richness of Native American history then and now. Whatever images we have drawn for ourselves of what an Indian looks like are probably wrong.”

Reed, who first taught the class in fall 2014, provided students with the names of Cherokee people who lived and worked in the area at the time of the Indian Removal and those who were held in stockades awaiting removal. Very little is known about them except perhaps a line listed in government records after they made claims for property losses. Students selected a name and then developed the person’s biography, researching the period and the area in which the Cherokees lived by visiting public libraries, reading other biographies and investigating government documents.

Myers researched Polly Mocking Crow, a woman who lived in what is now Polk County, Tennessee. “For someone who grew up in the Internet age, finding things in books is embarrassingly difficult,” she said. “Not every public record has been put on the Internet. I had to research her circumstances and area more than her name. I found that was a better way to tell her story—through all the things that existed around her.”

She would eventually ask for repayment for her featherbed, among other goods, which indicated she may have been a woman of means.

“This has been important to me, to research someone who was not a chief or any important person but a really normal person and a woman—a housewife with children,” Myers said. “This story is so seldom told and I wanted to tell that story.”

Reed is collecting Myers’s work and that of her peers, as well as that of the students in the fall 2014 class. She plans to partner with members of the Cherokee Nation to translate the students’ work into the Cherokee language. She also will contact Cherokee artists who are interested in illustrating the books.

“They could be a resource that we can give back to the Cherokee Nation,” Reed said. The biographies would also be beneficial to non-Cherokee people, Reed added, noting that “local museums and heritage centers are not geared toward children but nerdy adults who are into history.”

“This is a good way for children to understand history because the materials are child-specific,” Reed said.