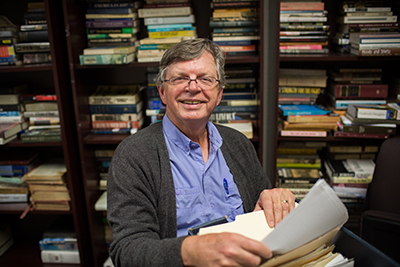 Robert “Jeff” Norrell is the Bernodotte Schmitt Chair of Excellence, and author of “Alex Haley and the Books that Changed A Nation.” (St. Martin’s Press, 2015)

In writing a biography of Alex Haley, I learned some surprising things about him and his career as a writer. Haley sold more books in one day in February 1977 than I have sold in my whole career of publishing. Both his two main works, The Autobiography of Malcolm X and Roots, sold in the neighborhood of six million books. Haley became a great celebrity, with all its pleasures and its pitfalls.

Haley had only a little college education before he went into the military in 1939, where he had a two-decade-long apprenticeship as a freelance writer. He was not a natural or even talented prose stylist, but he worked on his craft diligently for decades. He benefited from excellent editing from such magazines as Reader’s Digest, Saturday Evening Post, and Playboy. His agent and his editors at Doubleday guided his writing efforts for years. I was astonished at the sustained and detailed critiques they gave Haley over many long years.

Roots was published in September 1976 and the televised mini-series based on the book was viewed by 130 million people in January 1977. Fame of that magnitude sparked envy and criticism. A British journalist claimed that Haley had fabricated the African background of his ancestor Kunta Kinte, and two American genealogists insisted that he had gotten the Haley family lineage in the United States all wrong. Haley and his publisher made the mistake of promoting the book as nonfiction, rather than calling it a historical novel that adhered as faithfully as possible to known facts. At the same time, two writers sued Haley claiming that he had plagiarized their books. One of the claims was specious, but the other proved that several passages of Roots were virtually identical to some in a novel called The African. Haley won the first suit and settled the second. Both brought negative publicity that undermined Haley’s heroic status to many Americans who had admired his work.

Still, Roots revised how the popular mind in America understood slavery, changing it from being the romanticized institution depicted in Gone with the Wind to a realistic understanding of its violent, inhumane nature. To me, Roots remains the most important book on American slavery, and I think it should be recognized as that. For this reason, I wrote a biography of Alex Haley.