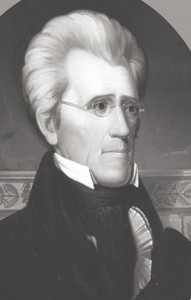 The History Department’s Andrew Jackson project recently celebrated the publication by University of Tennessee Press of The Papers of Andrew Jackson: Volume IX, 1831. This massive 987-page volume documents the crucial third year of Jackson’s tumultuous presidency. Jackson’s papers in 1831 reveal such scintillating events as the famous Peggy Eaton sex scandal, which broke apart Jackson’s Cabinet and culminated with one member publicly accusing Jackson of countenancing a plot to assassinate him. Letters, memoranda, and presidential messages trace the unfolding of Jackson’s growing rift with his vice-president John C. Calhoun, the implementation of Jackson’s notorious Indian removal policy, the administration’s response to Nat Turner’s Virginia slave revolt, and political battles over the tariff, nullification, and the Bank of the United States.

Besides these big issues, there is much of private and personal interest as well.   There are petitions from people in all walks of life asking for presidential pardons, for military pensions, for government jobs, and for various official favors. We learn much about Jackson’s home and family life: his conflicted relations with his favorite niece and nephew, who opposed him over the Eaton affair; his affectionate concern for his adopted son and new daughter-in-law; his troubles with overseers and slaves on his Tennessee plantation; and his management of his racehorses. Overall, this volume offers an incomparable window not only into Jackson and his presidency, but into America itself in 1831.

History professor Daniel Feller and research associate professors Laura-Eve Moss and Thomas Coens edit the Jackson Papers. The project receives support from the History Department and the College of Arts and Sciences and from two federal agencies, the National Historical Publications and Records Commission and the National Endowment for the Humanities. The next volume, covering the year 1832, is in preparation for projected publication in 2016. It will highlight Jackson’s veto of the Bank of the United States and his proclamation against nullification, two signature documents of his presidency. The entire Jackson series will also soon be available online as part of the American Founding Era Collection produced by University of Virginia Press’s Rotunda digital imprint. More information and recent news about the project can be found on its website at http://thepapersofandrewjackson.utk.edu/.