UT’s Center for the Study of War and Society and our history department have been awarded a contract as part of the US Department of Veterans Affairs’ new Veterans Legacy Program. This program pairs local universities and school systems to produce education materials and public outreach programs about local National Cemeteries. Nine universities in the United States received awards. 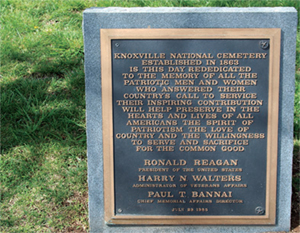 At UT, a team of four undergraduate researchers has launched into investigating individual stories of veterans interred in the Knoxville National Cemetery. In partnership with the East Tennessee Historical Society and the Knoxville History Project, their research will be used for a book about the cemetery and for lesson plans, digital resources, and teaching materials for K-12 students in Knox County Schools and cemetery guides for the general public.

Knoxville’s cemetery has special significance as one of the nation’s earliest, established by Union Major General Ambrose Burnside during the Civil War following the siege of Knoxville and Battle of Fort Sanders, with veterans from every conflict the United States has been involved in. The experience of intense local primary source research will enrich undergraduate education in our department and is already yielding unexpected local history.