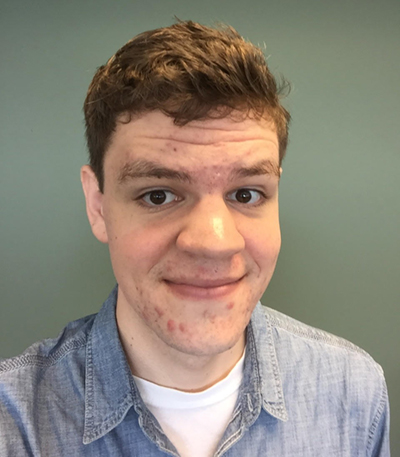 Peyton Snyder, a senior history major at UT, recently finished his honors thesis, “Fellows in Faith and Heritage” under the supervision of Professor Vejas Liulevicius. Researching this project required learning how to read documents written in old German cursive, a skill that few historians develop prior to graduate school. To master this unusual skill, Peyton took a special course in Winston-Salem, North Carolina, one of only two such programs in the country. With generous funds from the Leroy Graf undergraduate research fellowship, Peyton was then able to travel to the University of Notre Dame archives to begin his research.

His project focuses on the largest German-American Catholic organization, the Central-Verein, from the late nineteenth century through the 1920s. Peyton explored how these German-American Catholics negotiated their identity in the context of anti-Catholic strains of German nationalism, ethnic and linguistic strife in the American Catholic Church, and pervasive anti-German sentiment in the United States during World War I. While in the archives, Peyton worked through a large volume of documents, including letters between German immigrants in America and the family members they left behind in Europe. The letters from the period 1914-17, prior to US entry into the Great War, were especially interesting as many of these German-Americans had family members serving in the German military and facing hardships on the home front. This research also yielded some surprising discoveries. For instance, Peyton found that the Central-Verein sent $3 million in financial aid to impoverished ethnically-German parishes in Europe (some lying outside the nation-state, in Czechoslovakia and Poland) during the postwar economic crisis. A central finding of this thesis is that by the 1910s, there was a distinct ethno-religious identity in the Central-Verein, whose members imagined themselves as part of a global community of German Catholics.