History comes in all shapes and sizes. Historians and their archives are like peanut butter and jelly – the two just go together. There are, however, many sources for historical evidence beyond the archive. A few of our faculty have discovered history in some unusual places. 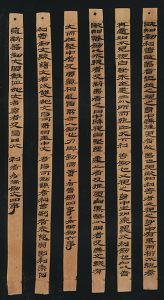 During the early imperial period, especially between about 100 BCE and 100 CE, there was a significant military presence in what in the area of what is now Gansu, Xinjiang, and Inner Mongolia. The military bureaucracy in charge of that presence left behind its documents and the arid environment helped preserve them. Those documents provide information about the functioning of military institutions and the lives of soldiers and others who lived in the area.

The image shows example wooden writing strips from China’s desert northwest. These strips contain a brief text explaining how to evaluate swords. It advises the reader about how to identify high quality blades based on a visual examination.

For discussion and translation of this text, see Charles Sanft, “Evaluating Swords: Introduction and Translation of a How-to Guide from the Han-Xin Period,” Early China 39 (2016): 231-53 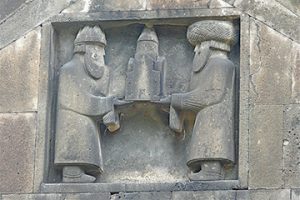 At the end of the 10th century, a scion of the Armenian royal house founded a monastery at Hałpat and celebrated his good deeds by erecting a statue of himself on its façade. We find an inscription on this statue where the weave of his turban breaks pattern: shāhanshāh Anih al-malik, King of Kings of Ani, King.

Ani, known as “the City of 1,001 Churches,” is now a haunting city of ruins in eastern Turkey. At that time, though, it was the heart of the thriving Kingdom of Armenia. On the face of it, this inscription reveals nothing but a claim to kingship and capital, both easily corroborated elsewhere.

Yet we can in fact learn a lot from this inscription. Shāhanshāh is the title of the kings of the pre-Islamic Iranian Empire, which had collapsed centuries earlier. In the 10th century, Muslim rulers across Iran and Iraq frequently borrowed the title to vaunt their own importance. The Armenian nobles express their power in terms that are familiar both to their own history (as a province of the pre-Islamic Iranian empire) and also to their contemporary Muslim neighbors. They announce themselves in Arabic (al-malik), but also Persian (shāhanshāh) instead of their native Armenian.

While the words of the inscription bring nothing new to table, then, we still learn that expressions of power were rooted in the pre-Islamic Iranian past, that the regional language of power was Arabic, and that Christians formulated their claims to power in dialogue with their Muslim neighbors. 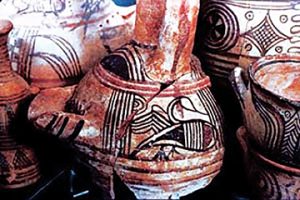 Archaeologists deal with stuff, material culture, and there is no stuff more ubiquitous on archaeological sites than ceramics (heat-hardened clay). Ceramics have an extraordinary range in both high- and low-tech applications. Water filters, roof tiles, pottery, dinnerware, sculpture, knife blades, bricks, cook tops, automobile brakes, bearings, dental crowns, joint replacements, body armor, skis, superconductors, and even the tiles on the space shuttle are made from ceramics. Even our cultural landscape is populated with iconic characters made from clay (and claymation) such as Gumby, Wallace and Gromit, and the California Raisins. A world without ceramics would be unrecognizable.

Ceramics have a long history, reaching back to the Upper Paleolithic, around 28,000 BCE. Archaeologists found human and animal figurines made from clay at Dolní Vestonice in the Czech Republic. Whether these figurines were intentionally heated (making them ceramic) is still up for discussion, but clearly the very first use of clay was non-utilitarian, used to express religious, artistic, or abstract ideas.

A more functional and quotidian use of ceramics to produce pottery for food processing, storage, and transport began much later, roughly 7000 BCE in the Near East, or perhaps as early as 10,000 BCE in Japan. This quickly led to the accumulation of surplus and wealth, allowing the creation of markets and credit. It also led to an expansion of the culinary arts as new methods of food preparation and new foods such as cheese, beer, and wine were invented. The production of pottery eventually became a specialized skill and lead to manufacturing concepts such as standardization.

Pottery also served as a blank canvas for communicating social information. Almost as soon as pottery was invented, it was decorated and new technologies, like glazing, developed. Such decorative schemas told stories, delineated groups identities, and served as marketing tools. Activities such as feasting used well-made or highly decorated pottery as a means of projecting social status and wealth. The study of ceramics enables archaeologists to piece together the social, economic, and even political worlds of the past 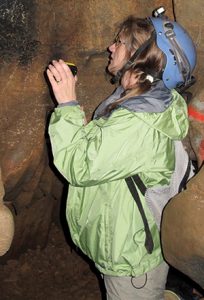 From her winding intellectual path to become a historian of Native Americans, Professor Julie Reed is comfortable with out of the ordinary primary materials. If she knew two years ago, however, the next archive she entered would require a helmet and knee pads, she would not have believed it. Yet, her newest archival materials include writings in several caves located in what was the Old Cherokee Nation before forced removal (1838-1840).

As Cherokee people faced increasing pressure to remove west of the Mississippi, Sequoyah, an illiterate, monolingual Cherokee speaker invented a written language. Its ease of use led to its widespread dissemination. Sequoyah moved west voluntarily in advance of forced removal, while his invention remained in the east and went west. Cherokee people used this writing in many expected ways: they wrote letters, established a bilingual newspaper, published their laws, and recorded history.

For most early 19th century Cherokee people, caves were not unknown. In fact, caves occupied a significant place within older cosmological understandings of the world, which is reflected in some of the writings on the cave walls. Cherokee people also used this space to record recent events; they recorded history.

What makes this archival record so profound is that rarely are collisions of the changes and continuities over time that historians study so obvious. Cherokee people used Sequoyah’s new technological innovation in an old and powerful space to convey more ancient understandings of the world. The archive, the cave itself, and what it contains, the texts, are both primary documents. So, whether she expected it or not, there she is—in a cave—conducting archival research.