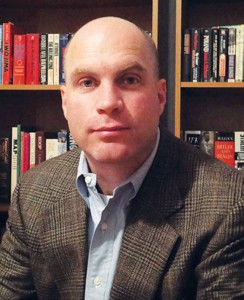 John C. McManus’s career success is testimony to the quality of UT’s graduate program in history.

McManus completed a doctorate in the department in 1996 and has since become an internationally recognized authority on U.S. military history.

In December 2014 the University of the Missouri Board of Curators named John McManus the Curators’ Professor of History and Political Science, at Missouri University of Science & Technology. This honor recognizes “outstanding scholars with established reputations in their field of study.” Declared a “Top Young Historian” by History News Network in 2007, McManus is the author of eleven books. His latest, The Dead and Those About to Die — D-Day: The Big Red One at Omaha Beach, was published in April 2014. During a subsequent book tour, he gave the keynote lecture at the National World War II Museum’s 70th Anniversary Commemoration of the Normandy invasion.

In 2012 he received the Missouri Governor’s Award for Excellence in Teaching. During his time at the University of Tennessee, he was a Normandy Scholar, and the Assistant Director of the Center for the Study of War and Society.

Visit our website to learn more about our distinguished alumni and use the Alumni Response Form to update your information or to add your name to the department mailing list.