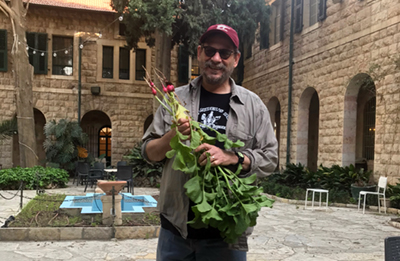 Like playing musical chairs, when COVID-19 hit you grabbed the nearest chair and hunkered down. Any chair would do, and in my case, it was the Albright Institute, where I found myself virtually alone, rattling around a 100-year-old stone compound in East Jerusalem during a pandemic. That I found myself at the Albright Institute was not unexpected; I was awarded a fellowship for this spring. It’s the rattling around alone and doing the cooking that was the unexpected. I arrived in mid-January as one of six fellows, along with a full staff, and the usual assortment of Albright denizens who come and go in strange and unknowable orbits. Due to COVID-19, by early March, Agatha Christie style, we were whittled down to two, and I was doing the cooking. There are undoubtedly much less accommodating places to wait out a pandemic, and on that score I consider myself very fortunate.

The W.F. Albright Institute of Archaeological Research, is a hulking relic of a colonial past that shares more of its DNA with the British Raj than the less corporeal American version. Of the 27 American overseas research institutes, the Albright is the second oldest; the building dates to 1925 and is situated in East Jerusalem, the Palestinian side of town, just down the street from Herod’s Gate in the Old City. The building and its contents are a full expression of a kind of languorous miasma best associated with the close of the Ottoman Empire (think the film Pascali’s Island).

Life at the Albright is all about the building, and the omphalos of the building is the courtyard. The compound, constructed in 1925, is comprised of three two-story buildings (including two subterranean repurposed cisterns); a director’s house and lecture hall, a research library and hostel, and a kitchen/dining room/common room (along with a few apartments) that form a U shape around one of Jerusalem’s true hidden gems, an exquisite garden courtyard. The courtyard is a consistently cool and serene preserve that recalibrates pace to an even more languid tempo than the rest of dusty, sleepy Jerusalem.

The Albright is downright monastic, and even in the best of time the world passes it by. As I said, it’s a good place to hunker down. I have access to an excellent research library 24/7, we get food deliveries twice a week, we have a small grove of lemon trees and a rosemary hedgerow, a tenth of a mile circular driveway that makes a good track, and Wi-Fi, of course. Sadly, the place is not haunted, other than by the history of the Middle East.

I’ve been able to get my work done, put on a few pounds, and learned how to mix a decent sidecar (and yes, I feel conjured up by central casting). But all this torpor comes at a price; like everywhere, COVID-19 has cast a deep and unsettling pall on the place. With no fellows or guests, the flow of both funds and intellectual energy have dried up. In such a pensive time, big questions have plenty of room to bubble to the surface. And as president of the Albright, I have a front row seat in trying to make sense of all this all, trying to revision a future of unknown dimensions, trying to figure out just who’s Zooming who in the aftermath of COVID-19.

Most days begin with me and the director discussing the current situation and the necessary steps to ensure the safety of the residents and to keep the place running. By late-February we started cancelling a variety of programs: workshops, field trips, scholarly dinners, and the like. By mid-March, most of the fellows had left or been caught out of the country and were no longer allowed back (Israel shut down pretty quickly and thoroughly, a strategy that seems to have worked as the COVID numbers look very good and the country is now cautiously re-opening). With only two fellows left, we had to make the very difficult decision of furloughing the staff. During the next seven weeks none of the residents left the building, and while this sounds implausible, I can assure you it is not.

Since 1925 the Albright has survived a lot; changes in government, riots, wars (when Israeli soldiers tried to enter the building in June of 1967, Omar Jibreen, the cook (who was still here in 1984 when I was fellow) refused their entrance, telling them it was American property (they sheepishly abided as many of the Israeli high command knew the Albright’s reputation), and now a global pandemic.

I’m pretty sure the Albright will make it through this challenge as well, and I am working hard to ensure that will happen. We plan on reopening in August when a new group of fellows begins to arrive. We are holding our breath that we can do this safely but like every institution, so much is out of our hands. With all that is going on (and not going on), tomorrow, like every other day since mid-January, I plan on working in the library on my book project (rural elites in small scale societies in the Iron Age I – not too dissimilar to the Albright itself), taking breakfast and a few coffee breaks in the courtyard, and then making dinner. Be safe, be cautious…