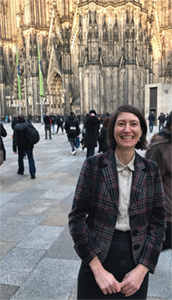 Sara Ritchey joins the UT Department of History as an associate professor after having served as associate professor and department head in history at the University of Louisiana, in the Cajun and Creole hub of Lafayette. Her research explores late medieval conceptions of nature, body, and community, and evaluates the way that these concepts continue to resonate in contemporary discussions about the environment, health, and the public sphere.

Her current book project, ‘Salvation is Medicine’: Gender and the Healing Communities of Late Medieval Europe, examines therapeutic knowledge and practice found in women’s religious communities in northern Europe. She is also the author of Holy Matter: Changing Perceptions of the Material World in Late Medieval Christianity (Cornell University Press, 2014) and several articles on gender and religious life in the European Middle Ages.

When not historicizing, Ritchey gets her kicks by running marathons, sewing garish dresses, cooking vegetarian meals, reading contemporary fiction, and joining her partner in the rearing of household pets and a nine-year-old human.

Nicole Eggers joined the department this year as assistant professor of African history. She received her PhD at the University of Wisconsin-Madison in 2013 and spent four years at Loyola University in New Orleans (which partially explains her penchant for making elaborate masks) before moving to Knoxville. 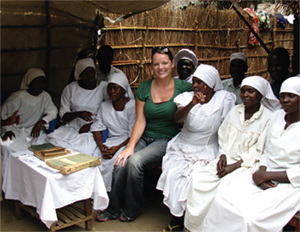 Eggers is interested in histories of health and healing, religion, violence, and incarceration in Central Africa, with a focus on the eastern Democratic Republic of Congo. Currently, she is working on a book titled Kitawala in the Congo: Power, Prayer, and the Politics of Health, which follows the history of an influential religious/healing movement known as Kitawala from its colonial beginnings in the 1920s to its present-day influence in some of the most conflicted parts of Eastern Congo. As a researcher, Eggers relies on both oral and archival sources, utilizing both Belgian colonial archives as well as oral histories and field work conducted in Congo.

During the summer of 2018, Eggers returned to the Congo to collect oral histories from the former site of a prison camp that hundreds of Kitawalists were sent to in the 1940s and 50s, in an effort to gain a better understanding of the meanings and memories that such spaces evoke.