This year, American pet owners will spend close to $100 billion on their pets, but these exorbitant spending habits have not always been the norm.

A little over a century ago, people and animals lived cheek-by-jowl in streets that were dirty and dangerous to human and beast alike. As more people squeezed into crowded cities, their need for animals only grew—for energy and food, companionship, and entertainment. At the same time, animals came to be associated with filth and disease and were often subject to cruel treatment and the worst abuses of human exploitation. 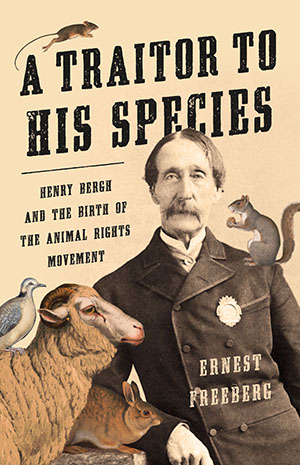 In his new book, A Traitor to His Species: Henry Bergh and the Birth of the Animal Rights Movement, award-winning historian Ernest Freeberg tells the fascinating story of the eccentric aristocrat who launched a then-shocking campaign to bring rights to animals.

“As a historian of the late 19th and early 20th centuries, I am interested in exploring ways that our own values and social practices evolved out of profound changes that affected Americans in these post-Civil War decades,” said Freeberg, professor and head of the UT Department of History. “For this book, I wanted to share the story of how our ancient relationship between humans and animals changed in profound ways. Many of the moral quandaries we face today about our treatment of animals were first raised and debated in the Gilded Age, and that’s in large part due to the work of Henry Bergh.”

In 1866 at age 53, Henry Bergh, a wealthy and eccentric failed playwright, founded New York’s American Society for the Prevention of Cruelty to Animals (ASPCA), the nation’s first animal welfare organization. Bergh’s declaration that it was time to end humanity’s “gross ignorance, thoughtlessness, indifference and wanton cruelty to brute creation” launched one of the important and often forgotten reform movements of the Gilded Age. The New York Times describes the book as “a compassionate, highly readable account of the 19th-century plight of animals, especially urban animals — and of those who tried to come to their rescue.”

Bergh and the SPCA’s band of badge-wielding agents staged dramatic arrests and brought abusers to court, provoking public debate about our obligation to other species. These conflicts forced Americans to think about the suffering experienced by cattle on their path to our dinner plates, the cruel methods cities used to control stray dogs, the enormous strain put on horses that provided the locomotive power of the industrial city, and the plight of exotic animals rounded up from around the globe and put on display in zoos and circuses for popular amusement.

“Across the country, thousands of men and women joined forces, founding state and local SPCAs and other organizations to punish the cruel and protect animals from abuse,” Freeberg said. “Together they created the first dog and cat shelters, passed laws to reduce the suffering of animals on the way to slaughter, launched the first salvos in a continuing battle against the use of animals in laboratory experiments, and worked tirelessly to make kindness to animals a part of every American child’s education.”

Henry Bergh’s legacy extends beyond the good work done by the SPCAs in the 19th century. Today’s advocates for animal rights can trace their work back to the anticruelty movement launched by the pioneering reformers of the Gilded Age.

“We still struggle with many of the issues that Bergh and his allies raised, but I hope this book helps us to appreciate where these questions about our moral obligations to animals came from, where the conversation started, and what the movement accomplished, as well as what it failed to change.”

Read reviews of A Traitor to His Species: Henry Bergh and the Birth of the Animal Rights Movement from the New York Times and Wall Street Journal. Freeberg discussed his new book in a featured New York Times Book Review podcast. Listen Now.