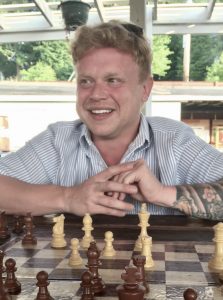 Biography: J received his BA in History and Philosophy in 2008, and his Masters in military history in 2011. For his masters thesis, J investigated the peculiar ways in which religious sermons delivered to militia groups served to inculcate group identity markers in colonial Massachusetts. Military sermons, delivered by choice to enfranchised men in front of political leaders, were an early form of democratic political speech and encouraged desired religious and political attributes among soldiers and politicians alike.

In 2011, J. came to the university of Tennessee where he began studying religious ideas surrounding authority and identity in Early America. Directed by Dr. Christopher Magra, J.’s dissertation examines the application of anti-Catholic rhetoric by American Protestants to describe a variety of Christian and non-Christian groups. Scholars who study early American religious history have demonstrated that by the eighteenth century, anti-Catholic rhetoric and the fear of the power and reach of the Catholic church were well-established components of British identity. With the Glorious Revolution and the securing of an exclusively Protestant monarchy, anti-Catholic sentiment became one of the ideological pillars of the British Empire. After 1688, British North Americans eagerly appropriated paranoias associated with the power of the Catholic church as a sign of loyalty to the British Protestant succession and as a public demonstration of their own religious dissent. Yet by the turbulent 1760s, those same expressions of fear and resentment were being leveled at the Church of England itself. J.’s dissertation tells the story of how and why that happened. His research has uncovered an eighteenth-century discourse predicated on religious fears related to the abuse of power with internal and external dimensions. His dissertation will demonstrate that the patriotic, anti-Catholic vitriol peculiar to British America morphed over the course of the eighteenth century into a broader, all encompassing Protestant xenophobia. That xenophobia, simultaneously based in the fear of religious “others” as well as an egalitarian, democratizing sensibility, ultimately informed the creation of American political identity. J’s dissertation has benefited from research awards from the Newberry Library and the Massachusetts Historical Society, as well as the Charles O. Jackson Dissertation Prize. J. has also received generous travel and research support from the Departments of History, Religious Studies, and the College of Arts and Sciences.