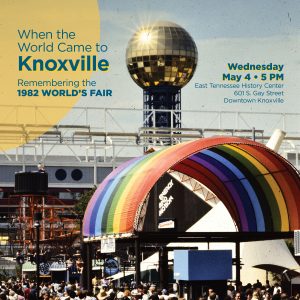 In 1982, the world came to the city of Knoxville when it had the privilege to host the World’s Fair. Historically, the World’s Fair is an event that showcases history, art, culture, and achievements of countries from around the world. This year, Knoxville will be celebrating the 40th anniversary of hosting the World’s Fair. A program, When the World Came to Knoxville: Remembering the 1982 World’s Fair, will bring a humanities perspective to the celebration and will take place at the East Tennessee History center May 4, 2022.

The program will explore how and why Knoxville was chosen to host the fair. Attendees will hear from Jack Neely, director of the Knoxville History Project, three professors from the University of Tennessee, and author Michael Camp, who will touch on the fair’s energy security theme. The evening will include the viewing of rare clips from the 1982 World’s Fair and will also touch on surprising aspects of the fair’s history.

This program is funded in part by a grant from Humanities Tennessee. This non-profit organization promotes engaging programs that explore ideas, stories, history, arts, and culture.

The event will also give attendees a preview of the four-part podcast series that will focus on the history of the World’s Fair. The production of the podcast is in collaboration with WUOT-FM, a National Public radio station owned by the University of Tennessee. The podcast and program will explore the history of world fairs, the 1982 Knoxville fair’s role in engaging the People’s Republic of China with the US, controversies in that year’s fair, and the Sunsphere’s history and impact.