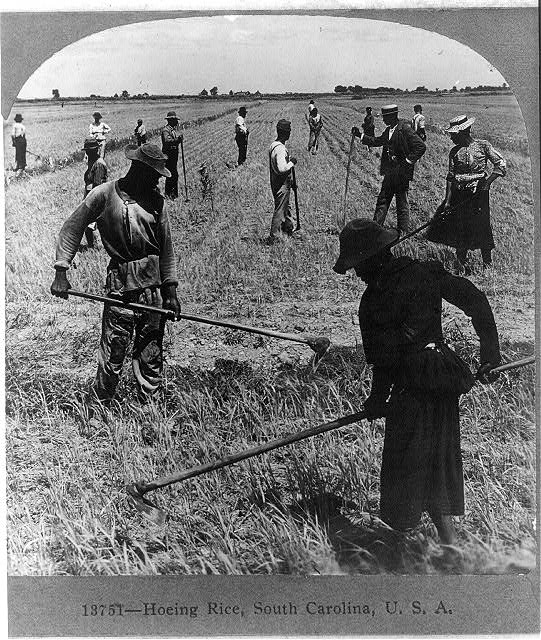 In our fourth entry on global histories of protest, riots, and race, we return to the United States. Professor Robert Bland looks at riots, strikes, and Black citizens’ struggle for justict in the South Carolina low country in 1876. Additional essays in the series can be found here.

Riot on the Combahee: Organized Black Resistance and the End of Reconstruction

“The petition of the undersigned respectfully showeth, that upon the Combahee and Ashepoo Rivers, in Colleton County, there has been for months past, and there still is, an unusual degree of excitement and disregard for the law, which place both the property and lives of property-holders and others in that region in danger” -I. B. Bissell, E. W.

“Proceeded yesterday to the disturbed rice districts and found no rioters nor had there been a riot.”

In 1876, the state of South Carolina was on a knife’s edge. The birthplace of Reconstruction, the radical experiment in biracial government, civic equality, and Black political power, the once formidable stronghold for radical republicanism was now in profound turmoil. A white counterrevolutionary movement, which had political and paramilitary dimensions, was expanding across the state; Daniel Chamberlain, the state’s conservative Republican governor, was at war with the progressive wing of his party over questions of race and the state spending; finally, the lowcountry’s cash-poor planter class sought to subdue the region’s Black agricultural workers who found the prospect of working for scrip both offensive and dehumanizing.

Faced with greater economic hardship, a shrinking window of political opportunity, Black South Carolinians went beyond the realm of electoral politics and peaceful protests and turned toward organized violence against property and their adversaries.[1] In doing so, they defended their hard-earned economic gains and made the case for a moral economy that superseded the narrow vision of the postbellum market-based order.[2] In the specific example of the Combahee River Rice Strikes, violence was necessary to highlight the injustice of the Lowcountry’s existing labor system, create solidarity among the region’s working class, and bring local political leaders to the negotiating table so that some of their demands could be met.[3]

The strikes began in late May, just as the year’s crop was beginning to sprout from the rice swamps that lined the Combahee River. On the eve of the nation’s founding, the slaveocracy that had violently replaced the region’s Indians with enslaved Africans and rice had become the wealthiest group of settlers in British North America. A century later, the scions of these slave owners found their political and economic power being contested by children of the men and women their forefathers once held in bondage. Dissatisfied with being paid in paper checks that could only be redeemed at stores owned by plantation owners—stores that sold inferior goods at exorbitant rates—Black workers claimed that the lack of a paper money left them unable to pay their debts and taxes. Even worse, a mysterious illness had begun to afflict the communities along the Combahee; without of paper currency and the Black workers could “buy no medicine nor employ a doctor and in consequence their wives and children die for want of relief.”[4]

The Lowcountry’s planters initially blamed the uprising on outsiders and called upon the state to bring order to the region. Convinced that their own workers were satisfied with their working conditions, the white planters argued that the protests were started by seasonal workers who were dissatisfied with a recent cut in daily wages. This “band of lawless vagrants,” used violence to prevent workers who were locked into yearly contracts from continuing their labor.[5] In addition to attacking workers who continued to work through the strike, the strikers also  destroyed the property belonging to the planters, including wagons carrying harvested rice.[6] Armed with “clubs, pistols, swords, and other weapons,” the aggrieved rice workers went beyond simply challenging unfair labor conditions. In the minds of these planters, the struggle over economic justice in the rice fields along the Combahee was more than a simple strike—they threatened to upend the entire social order of the region.[7]

When protests erupted again at the end of the summer, Chamberlain called on Robert Smalls, the Lowcountry’s most influential leader, to intervene in the conflict. A former slave who became a war hero, Smalls had gone on to found the first local chapter of the Republican Party in South Carolina, served in both the General Assembly and the state Senate in the South Carolina legislature, and now represented South Carolina’s Fifth Congressional District in the U.S. House of Representatives. Recognizing that many of the striking workers were not outsiders but his constituents, Smalls listened to their demands.  Meeting with more than 300 of the strikers, He called for “the abolition” of the check system in a letter to Chamberlain, calling it “worse than the evils of slavery.” Smalls sought to portray the protests as largely nonviolent and he made the case that while many of the strikers belonged to the state militia, the crowds on the Combahee were unarmed except for “a club or a stick.” For Smalls, the greater threat of violence was the growing posse of armed white men who likely envisioned themselves as having police powers despite possessing no official cloak of the law.

The true nature of the protest may have been more complicated than the narrative offered by Combahee’s white planters and Robert Smalls. The strikers told Smalls that they would “tie him up and give him one hundred and fifty lashes on his big, fat ass” should the politician try to interfere with their actions.[8] Despite his well-earned reputation as the champion of the region’s Gullah-Geechee working class, the movement that emerged in 1876 had a vision of politics that was broader than what anyone in the state had ever seen. The protesters included women and men, day laborers and landowners, Civil War veterans and young people. A brass band traveled alongside the group to keep the spirits of the strikers high. At several of the protests, the strikers and their fellow travelers sang a makeshift “Greenback Song,” which named their enemies, challenged the Republican Party’s opposition to paper money, and suggested that political ideology, vernacular cultural traditions, and class-conscious protest were all interconnected in the minds of Black Lowcountry residents in their fight for economic justice.

The Combahee Rice Strikes anticipated a larger struggle over the fate of Reconstruction. With the federal government abandoning its policy of military occupation, political violence in the South Carolina increased dramatically. Ultimately transferred into the hands of the Democratic Party following the 1876 presidential election, which was defined by fraud and voter intimidation, South Carolina came embody the excesses of Reconstruction. Lost in the revisionist accounts of the struggle were the ideas, hopes, and dreams of those who participated in the struggle on the Combahee. In their actions, their mass meetings, and their songs, we see glimpses of the world they hoped to build and the broader vision of freedom that would not emerge without a fight.

[1] On anti-Black violence during Reconstruction, see Kidada Williams, They Left Great Marks on Me: African American Testimonies of Racial Violence from Emancipation to World War I (New York University Press, 2012); Carole Emberton, Beyond Redmption: Race, Violence, and the American South after the Civil War (University of Chicago Press, 2013); Elaine Frantz Parsons, The Birth of the Klan during Reconstruction (Chapel Hill: University of North Carolina Press, 2015); Hannah Rosen, Terror in the Heart of Freedom: Citizenship, Sexual Violence, and the Meaning of Race in the Postemancipation South (Chapel Hill: University of North Carolina Press, 2009).

[2] On a longer history of the Lowcountry’s moral economy, see John C. Strickland, “Traditional Culture and Moral Economy: Social and Economic Change in the South Carolina Low Country, 1865–1910,” in Steven Hahn and Jonathan Prude, eds., The Countryside in the Age of Capitalist Transformation: Essays in the Social History of Rural America (Chapel Hill, 1985), 141–78.

[8] Steven Hahn, A Nation under Our Feet: Black Political Struggles in the Rural South from Slavery to the Great Migration (Cambridge, Mass.: Belknap Press of Harvard University Press, 2003), 348.