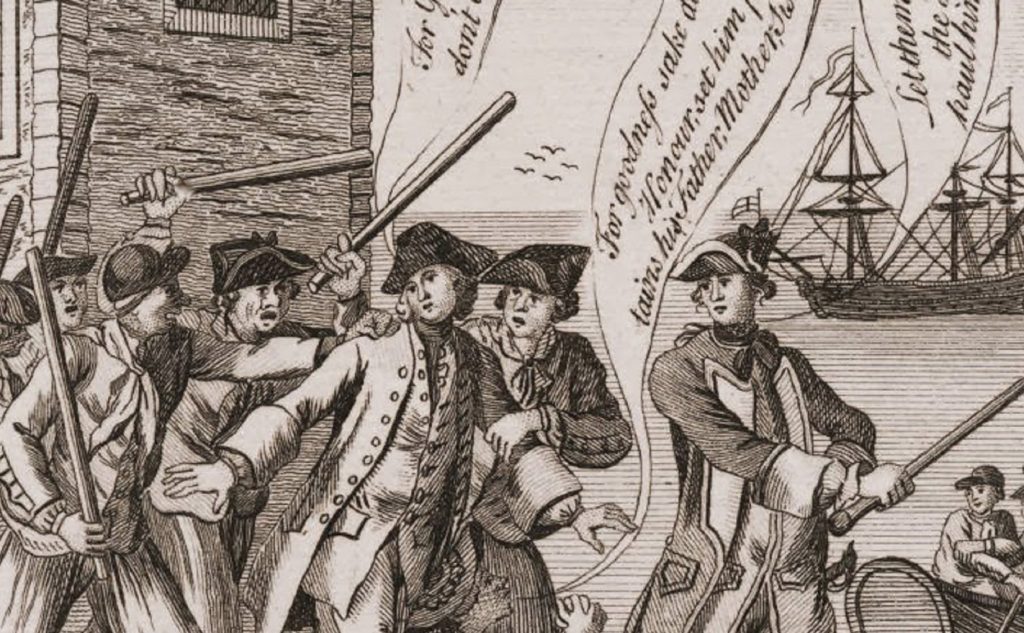 As part of our response to the protests and riots following the deaths of George Floyd and Breona Taylor, the History Department will be running a series of pieces on the long, and global history of protests riots. Up first, Professor Chris Magra notes the long history of casting blame on outsiders to deflect the weight of political protest.

When “Officers of the Navy” set out “to impress men contrary to an express Act of Parliament [i.e. the Sixth of Anne],” then such “violations of law and arbitrary proceedings” produced “popular disorders.”  – Junius Americanus, The Political Detection, 1770.[1]

The perception of riots matters almost as much as the popular protests themselves.  Consider who we perceive as participating in riots.  If we think that they are outsiders, people who don’t belong, who aren’t us, then we can breathe easy.  Foreigners are illegitimate, and so are their actions and motives.  It’s much more disconcerting if insiders are in the mob.

The distinction between insiders and outsiders mattered in eighteenth-century North American urban areas.  Royal governors in crowded seaports routinely shifted the blame for riots onto outsiders to delegitimize popular protests.  In 1747, for example, British naval officers broke the law.  They violated a 1708 ban on impressment in North America.  Americans referred to this law as the Sixth of Anne, as it came into being during the sixth year of Queen Anne’s reign.  Naval seamen, men who were supposed to serve and protect colonists, entered Boston in press gangs and pressed Americans into military service.  People in Boston rioted for three days in response.  In his official report of the event to the British Admiralty, Massachusetts Governor William Shirley blamed “300 Seamen, all Strangers, (the greatest part Scotch)” for the violence in his city.[2]

Why did Shirley blame strangers for the riot?  Did foreigners enter Boston to stir up trouble?  Did the British government need to look to Scotland to resolve the matter?  Samuel Adams was there that day.  He knew it was his neighbors, not strangers, who had resisted British authority.  Following quickly on the heels of the riot, Adams published “An Address to the Inhabitants of the Province of the Massachusetts-Bay in New England, More Especially, To the Inhabitants of Boston.”  The Address was “Occasioned by the late Illegal and Unwarrantable Attack Upon their Liberties.”[4]  He wrote that press gangs carried locals “away from their Families.”[4]

There were several reasons Shirley wanted the Admiralty to believe Bostonians were not responsible for the riot.  The commercial port was well within his jurisdiction.  It was the seat of his political power.  This was not a far-flung disturbance.  It happened on his doorstep.  Shirley wanted imperial administrators to believe that the calamity was in no way his responsibility.  He also wanted the riot to be seen as anarchy.  Shirley described it as “an Extraordinary Riot and Tumult,” an “outrageous Tumult,” and an “Insurrection.”[5]  He also called it “an Insult upon the King’s Government.”[6]  And he hoped Parliament would bring these foreign anarchists to justice.

Shirley also wanted to influence Parliament’s perception of the motives behind the riot.  The royal governor hoped to distract attention away from deep and widespread concerns in Boston by blaming the disturbance on outsiders with no respect for law and order.  He did not want the British government to realize that many Bostonians were shocked to see navy officers breaking the law.  And Shirley did not want British officials to believe rational insiders would take to the streets to effect change.  That would mean there was a serious, systemic problem.

Adams wanted exactly that.  He encouraged his readers to place the riot in its proper context.  Under such a “Government,” in such circumstances, with the deck stacked against them, what were “the People” to do?  Echoing John Locke, Adams answered that violent resistance was entirely justifiable in these circumstances:

When I reflect on the Consternation the Inhabitants of this Town were in last Tuesday Morning; I don’t in the least Wonder at the People’s running together for their mutual Defense…For when they are suddenly attack’d, without the least Warning, and by they know not whom; I think they are treated as in a State of Nature, and have a natural Right, to treat their Oppressors, as under such Circumstances.[7]

1747 was early for this kind of radical language.  The revolution that took place in other Americans’ hearts and minds took longer to develop.[8]  But, press gangs, those “Tools of arbitrary Power,” those “lawless Invaders of our Liberty,” accelerated this process for Adams and others like him.[9]  And Adams wanted his readers to see the riot as a rational response to the abuse of power.

Diverting attention away from the actual participants in riots and the authentic concerns of the mob remains the norm in the United States in 2020.  Minnesota Governor Tim Walz stated that outsiders were primarily responsible for riots in Minneapolis in the wake of the death of George Floyd during his detention by city police.  In a press conference, Walz insisted that a government assessment of the situation revealed 80% of the protestors resided outside Minnesota.[10]  While he admitted that racism was real, Walz tried to get Americans to see that the real problem was the influx of troublemakers.  Like Shirely, Walz did not want people to focus on the abuse of power in his jurisdiction.

The optics of riot participation matters.  Shifting our understanding of who protested and why away from the actual people involved can delay or prevent helpful measures.  We can’t resolve problems that we don’t begin to understand.  Such obfuscation can also delegitimize legitimate concerns.

[1] Junius Americanus, The Political Detection; Or, the Treachery and Tyranny of Administration, Both At Home and Abroad… (London, 1770), 42.

[3] Early American Imprints, Series I: Evans, 1639-1800, (hereafter EAI1) #5900.  Amicus Patriae/Samuel Adams, “An Address to the Inhabitants of the Province of the Massachusetts-Bay in New England, More Especially, To the Inhabitants of Boston; Occasioned by the late Illegal and Unwarrantable Attack Upon their Liberties, and the unhappy Confusion and Disorders consequent thereon.”  (Boston: Printed and sold by Rogers and Fowle in Queen-Street, 1747).

[8] John Adams, Samuel’s cousin, famously reflected in 1818 that the American Revolution “was effected before the war commenced.  The Revolution was in the minds and hearts of the people.”  Letter from John Adams to H. Niles dated February 13, 1818.  Founders Online, National Archives (http://founders.archives.gov/documents/Adams/99-02-02-6854).