Where: On Zoom. Please register for the event here. 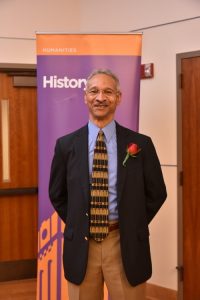 The Department of History is pleased to present the 6th Annual Fleming-Morrow Lecture in African American History. John H. Morrow, Jr, Franklin Professor of History at the University of Georgia, will speak on “Black Achievement and White Denial: African American Soldiers in the World Wars.”

In 1971, Dr. John H. Morrow, Jr. made history when he became the first African American faculty member in the College of Arts and Sciences at the University of Tennessee, where he taught for seventeen years. During that time, Dr. Morrow, a distinguished historian of modern Europe and World War I, was selected as a National Alumni Association Outstanding Teacher. He also holds the distinction of being the University of Tennessee’s first African American Macebearer, the highest honor that a faculty member can receive. In 1983, Dr. Morrow made history again when he became the first African American to chair a department at UTK. He served as head of the History Department until his departure from the university in 1988. Dr. Morrow is currently the Franklin Professor of History at the University of Georgia and the author of six books and edited collections, including most recently Harlem’s Rattlers and the Great War: The Undaunted 369th Regiment and the African American Quest for Equality (2014).

In November 2019 Dr. Morrow was the recipient of the 2019 Pritzker Military Museum and Library Literature Award for Lifetime Achievement in Military Writing, which is awarded to a living author for a significant body of work dedicated to enriching the understanding of military history and affairs. It was first awarded in 2007 and has since become one of the most prestigious literary prizes of its kind. On September 10, 2020, Morrow was awarded the Albert. B. Saye Professorship in History at the University of Georgia, which he holds concurrently with the Franklin Professorship.