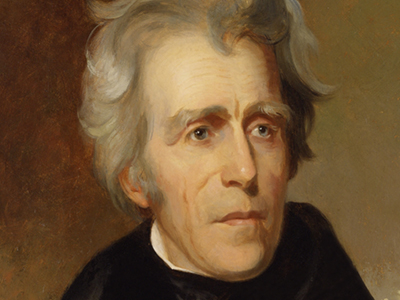 Andrew Jackson, one of the most critical and controversial figures in American history, is a president of great interest to the public. Thanks to a project at the University of Tennessee, Knoxville, his legacy is available through The Papers of Andrew Jackson, an ongoing series that gathers and publishes Jackson’s extant literary record. The ten-volume series, including the latest volume, 1832, is now available through UT’s online archive: http://trace.tennessee.edu/utk_jackson.

“Jackson is an inescapably important figure in our nation’s history,” says Dan Feller, professor of history and director of The Papers of Andrew Jackson project. “From its beginning, the aim of the Jackson papers project, and of similar projects elsewhere, has been to promote Americans’ understanding of their history by making available crucial primary sources and documents from which we can see, directly, what our forebears said and did.”

The project, which began in 1971, is a collection of volumes that make a broad, foundational, and permanent contribution to historical knowledge and are an essential source for historians, biographers, archivists, librarians, genealogists, journalists, and screenwriters. They have been extensively cited and praised not only in scholarly works, but also in best-selling books, on television, radio, and websites.

“The latest volume focuses on 1832, which was a pivotal year in Jackson’s presidency,” Feller says. “It was the year he vetoed the Bank of the United States, bypassed a Supreme Court decision in order to continue pursuing his Indian removal policy, and won re-election to a second term.”

The University of Tennessee Press publishes each volume in book form, but the project has kept pace with technology. Newfound Press, an online imprint of the UT Libraries, makes searchable and downloadable PDF versions available online at http://trace.tennessee.edu/utk_jackson. Andrew Jackson’s evidentiary record can be accessed and digitally searched by anyone, anywhere, for free.

The Jackson papers are also available as The Papers of Andrew Jackson Digital Edition, part of the American Founding Era Collection hosted by the University of Virginia Press’s Rotunda digital imprint. The platform allows users to search the full edition, to limit searches to individual volumes, or to search across all the editions in the Collection, including the papers of George Washington, Thomas Jefferson, James Madison, and other major figures of the nation’s early history. The digital edition also includes direct links from more than 1,400 transcribed and cited documents in the edition to images of the original manuscripts in the Library of Congress.

“For many years, delving into Andrew Jackson’s papers required buying or borrowing some pretty heavy and expensive books and then burrowing through them to find what you were looking for,” Feller says. “Now, for anyone with a digital device, searchable access to the entire corpus is just a few keystrokes away. The ready availability of this record will revolutionize Jacksonian scholarship and prove a boon to anyone who wants to encounter this pivotal and controversial American for themselves, firsthand.”

The Papers of Andrew Jackson project is supported by the UT College of Arts and Sciences, the National Historical Publications and Records Commission (NHPRC), the National Endowment for the Humanities, and the Tennessee Historical Commission (THC). The NHPRC and THC recently renewed their annual grants to help fund the publication of the next volume, which will be available in 2019.

The Society for Historians of the Early American Republic recently awarded Professor Feller its Distinguished Service Award for outstanding contributions to the work of the organization and to the study of early American history. Last year, The Society for History in the Federal Government awarded the Jackson series its Thomas Jefferson Prize for an outstanding contribution to federal history, and a review of the latest volume in The Journal of Southern History acclaimed the series as “the gold standard of historical documentary editing.”

“As a project in the UT Department of History, the papers are more than just a collection of correspondence. They are a recruitment tool for our graduate program that allows us to compete for top-quality graduate students with other programs that are usually better funded and have a larger faculty,” Feller says. “With this project, we have positioned ourselves as the country’s leading authority on Jackson.”