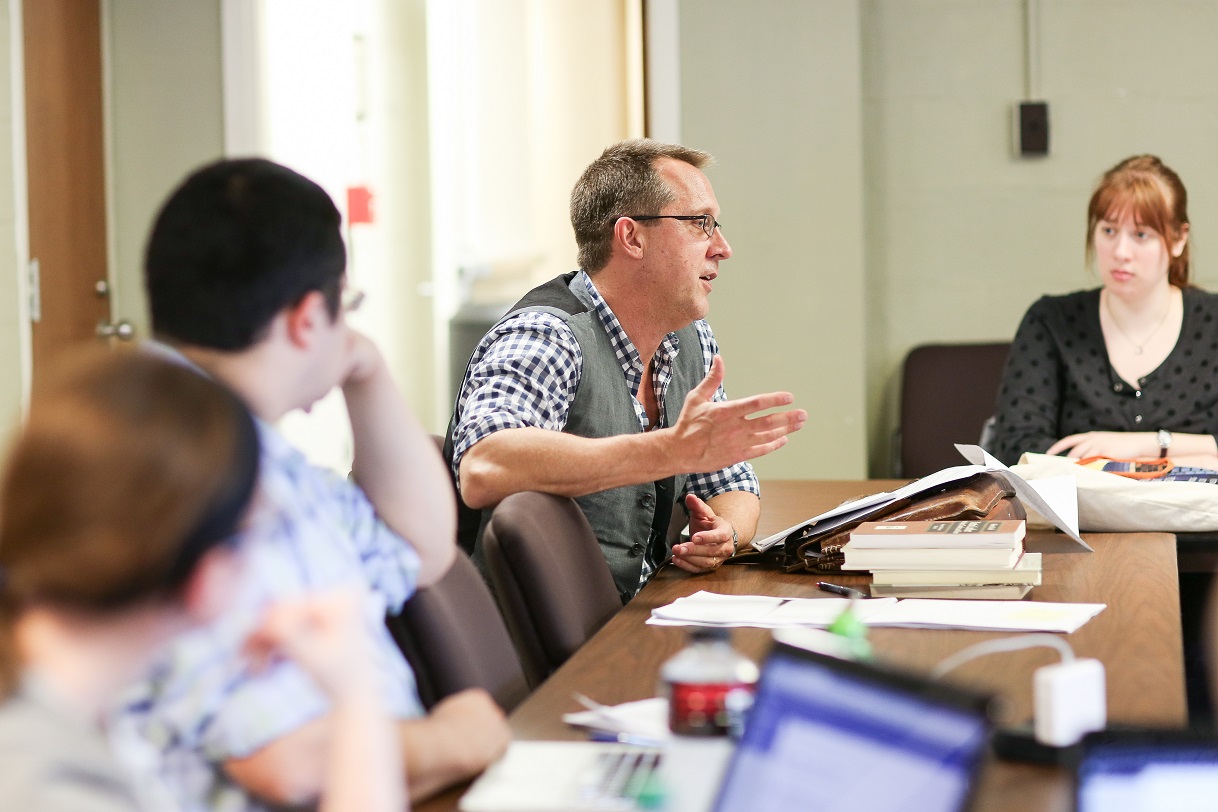 HIST 499 is the capstone course in the history major. Students usually take 499 in the final year of their studies, though juniors sometimes take it, too. In 499, students undertake a research project of their own design and, with close and attentive faculty mentoring, work toward writing a substantial paper over the course of a semester. Most history faculty teach 499, and they work in a broad variety of fields. These faculty have widely varying research and teaching interests and they approach the study of the past differently. The faculty who teach 499 often take their own, specific research interests and current writing projects as the themes of their 499 courses. This means that by taking a 499, students are participating in the cutting-edge research projects of our faculty.

Here are just a few of the 499 courses faculty have taught in recent years (or will soon teach):

DR. MARGARET ANDERSEN
The Algerian Revolution
This seminar focuses on the Algerian Revolution of 1954-1962. The course examines French colonial rule in Algeria and the rise of the Front for National Liberation (FLN). Other themes include the use of torture in the conflict, the role of public opinion and journalism, the independence of Algeria, and the mass departure of European settlers in 1962. In addition to learning about scholarly debates and methodology, students explore the role of memory and politics in shaping our understanding of this period of history.

DR. ROBERT BAST
The Pursuit of Holiness in the Later Middle Ages
This course examines the religious beliefs, practices and institutions of the Christian peoples of Western Europe in the complex and fascinating Later Middle Ages (roughly 1300-1500). This was a period marked by contradictions: crises such as famine, plague, social revolutionary fervor, and schism and corruption in the Church existed side-by-side with the extraordinary cultural flourish of the Renaissance, and with religious movements that provided people an abundance of opportunities to use and shape their religious culture in meaningful ways, with or without the sanction of the institutional Church.

DR. MONICA BLACK
The Supernatural: A Global History
This seminar explores various manifestations of and encounters with the supernatural across time and around the globe, and takes up a series of interesting questions. For example, how have supernatural phenomena been interpreted and understood in various historical cultures? Through what practices have people drawn on—or sought to avoid or ameliorate—the power of the supernatural? How have people distinguished religion from magic, and knowledge from superstition, in different historical cultures? Does the term supernatural even make sense—and if so, what does it mean? Is it meaningful only in “Western” societies or does it have broader applications? How can folklore, the human imagination, and fantasy, which have often been excluded as legitimate sources for knowing about past societies, actually help us understand a great deal about those societies? What have been the effects of supernatural experiences and beliefs on history in a broad sense?

DR. LUKE HARLOW
American Civil War Era
This course explores core debates in American history before, during, and after the Civil War. Topics include the slavery debates, the political crisis of the Union, the meaning of the war, civil and voting rights, and the making of the modern American state.

DR. CATHERINE HIGGS
Twentieth Century South Africa: Segregation, Apartheid, and Democracy
Until the release of political prisoners in 1990 and the final abolition of apartheid in 1994, the modern South African state captured the world’s attention in large part because it appeared as a shocking anachronism on the world stage—a country where a small privileged white minority ruled an oppressed and disenfranchised black majority. In this course we will explore South Africa’s long twentieth century, from the outbreak of the Second South African War in October 1899 through the death of the country’s first democratically elected president, Nelson Mandela, in December 2013. Our goal will be to discover how a racially divided South African state evolved at the beginning of the twentieth century, why its leaders embraced an extreme segregationist model—apartheid—in the mid-twentieth century, and how the new multi-racial state has sought to cope with the country’s history.

DR. BOB HUTTON
History of Appalachia
This course focuses on the region we call Appalachia from the Revolutionary era through the Cold war period. What we now call Appalachia began as an upland intersection between Amerindian and European societies. It was later a subregion that complicated the nineteenth century’s sectional duality of ‘North’ and ‘South’ and, eventually, became a puzzling zone of poverty that continues to defy the myth of American exceptionalism. In the course, special emphasis is placed on issues of political economy, regional identity and the complex intersections of class and race.

DR. JACOB LATHAM
Private Values and Public Lives in the Ancient Mediterranean
Self-improvement is not a recent invention. How to win friends and influence people, The power of positive thinking, and even Become a Better You: 7 Keys to Improving Your Life Every Day have ancient Mediterranean antecedents. However, by contrast with most contemporary “self-help” programs, ancient self-transformation or self-fashioning often aimed at radical and total change—a complete re-orientation of one’s entire being. Thoughtful men and women in the ancient Mediterranean world attempted to change or to perfect themselves according to a wide variety of principles (philosophical, religious, ethical, political) and for a wide variety of reasons (to live the best life, to achieve public success, to earn immortality, to impress their peers). This seminar samples ancient “self-help” literature, ranging from philosophical to rhetorical and religious texts, in combination with important and challenging modern interpretative studies in order to understand how ancient men and women tried to transform themselves and their lives.

DR. WILLIAM MERCER
The Trial in American History
This seminar focuses on the role of the trial in American history.  From 1663 Virginia, to 1888 Chicago, to 1913 Atlanta, certain trials have occupied a special place in the American historical imagination.  However, we will investigate these incidents not to simply retell their sensational details, but as specific moments where existing notions of racial prejudice, class bias, popular sovereignty, mob rule, and the rule of law were exhibited, contested, and defined.

DR. ROBERT NORRELL
Writing Biography
Biography is perhaps the most popular form of history for most readers interested in the past. But as a genre, biography has often been dismissed as insufficiently intellectual. Still, historians sometimes undertake to interpret lives that are of large importance in the culture. Biographies about controversial characters sometimes shape intellectual currents. This course is designed to introduce senior history majors to the process of research and writing in history by examining the writing of biography.

The Civil Rights Movement
The Civil Rights Movement is remembered as a time of revolt in the 1960s. In fact, it was a movement of much longer duration, having begun much earlier and lasted past the 1960s. Its origins, course, and consequences are far more complex than is revealed in school textbooks and popular culture. Consequently, our focus in this course will be on the “long civil rights movement.”

DR. DENISE PHILLIPS
Health and Happiness in Historical Perspective
What does a person need in order to live a good life? In different times and places, people have come up with a wide variety of answers to this question. In this course, we will explore together the different ways that Europeans and Americans have searched for health and happiness in the centuries since 1700, examining along the way questions related to the history of medicine, the history of psychology, the history of education, and the history of everyday life.

Science and Religion in Modern Europe
This course explores three topics in particular that prompted Europeans to debate the proper relationship between science and religion from the mid-eighteenth through the mid-twentieth century: evolutionary theory, the mind sciences, and biblical history.

DR. CHARLES SANFT
The Emergent Empire: The Qin and Han Dynasties
The creation of the first empire in China took place in multiple fields of activity, no one of which had sole responsibility for the outcome. Students in this class will learn about the political thought, religious observances, ritual forms, legal systems, social practices, and significant events in the period when the Chinese empire was coming into being for the first time, roughly from the late third century BCE into the early first century CE.